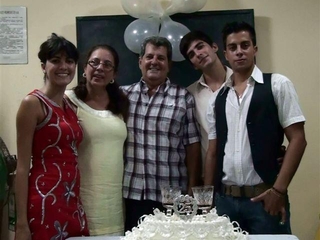 Ofelia Acevedo Maura, the widow of Oswaldo Paya, a Cuban dissident and leader of Cuba’s Christian Liberation Movement (MCL) who was assassinated by Castro State Security agents last year, has taken political refuge in the United States along with several members of the family. According to the family, the threats, harassment, and the constant surveillance they are subjected to by the Castro dictatorship on a daily basis has become overwhelming and they are fearing for their safety and lives.

The Christian Liberation Movement is not abandoning the genuine petitions of the people, and for that reason, along with our brothers, we call for a discourse among the people that can start a true transition.

With love we work on the proposal put forth by the opposition group known as The People’s Path that expresses the common objectives of the Cuban democracy movement. It is the road map toward human rights that prevents fraudulent changes from keeping the reality hidden  and offers authentic steps that will bring liberty and prosperity to our country, including everyone and for the good of everyone.

From inside and outside the island, we will continue taking action to start an international independent investigation that will publicly expose the truth behind the deaths of Oswaldo Paya and Harold Cepero.

We invite all people of good will to promote and support these petitions.

We are all Cubans, we are all brothers, and we want Liberty now!