A big “welcome to America,” to 30 Cuban refugees who landed early this morning in Charlotte County, on the Gulf coast of Florida, south of Sarasota.

LITTLE GASPARILLA ISLAND — Thirty men, women and children who told local residents they were fleeing a worsening “political situation” in Cuba came ashore on this fisherman’s paradise of a barrier island early Saturday morning, according to U.S. Border Patrol and Charlotte County Sheriff’s officials.
The refugees told authorities they’d spent three days drifting in a raft to get here from Cuba, but the investigators didn’t believe them. No raft was found and the refugees, who were in fine health, displayed none of the physical effects one would expect after three days at sea, according to Charlotte County Sheriff’s Lt. Richard McDonald.
It also remains a mystery whether smugglers dropped off the refugees on Little Gasparilla Island intentionally or by mistake.
The island has no bridges to the mainland. It doesn’t even have roads or cars; its residents use golf carts to get around on sandy paths lined with coconut trees and travel to the mainland via ferry or their own private boats.
However, the refugees would have been hard pressed to pick a friendlier place to land. The “islanders,” as locals consider themselves, greeted the refugees with warm smiles, jugs of cold water and an abundance of snack foods.
“The island opened up to them pretty good,” acknowledged islander Lowell McElroy, who was among the first to alert sheriff’s deputies to the landing.

Read the rest here.
While it would be unfortunate if they were part of a dangerous human smuggling operation, their feet are “dry,” so they get to stay. That they may have paid smugglers large fees — with a certain percentage set aside for the dictatorship so it looks the other way — only demonstrates the desperation so many feel to get off the island.
UPDATED, 8:01 p.m. EDT
An eyewitness filed this account of how residents and tourists on Little Gasparilla Island came out to welcome the new arrivals. Included are several photos like this one: 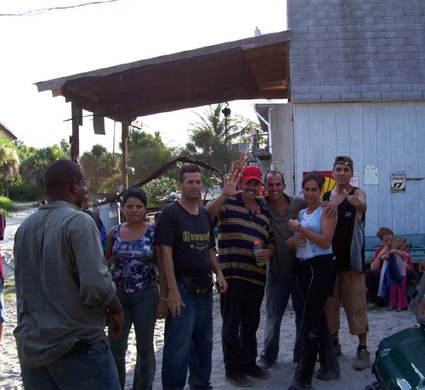