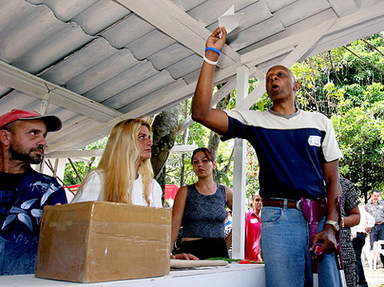 Independent journalist Guillermo “Coco” Fariñas, who this past week demonstrated his solidarity with Cuba’s political prisoners, is one of the giants of the Cuban opposition.
Last year, Fariñas went on a seven-month hunger strike to demand that he, and all Cubans, have unfettered access to the Internet. His protest failed to sway the dictatorship, but the dignity which he laid his life on the line for his beliefs, the example he set, earned him a spot in the pantheon of modern Cuban heroes, along with Martha Beatriz Roque, Darsi Ferrer, Oswaldo Payá, Jorge Luis García Pérez “Antúnez”, Oscar Elias Biscet and so many others.
Most Cubans still can’t surf the Internet, but Fariñas’ protest cannot be judged a failure.
Fariñas’ protest demonstrated to the world — at least to those relatively few of us paying attention — to what lengths the dictatorship is willing to go to limit what Cubans learn about the outside world, and their contacts with those who might seek to help them break the bonds of tyranny.
And Fariñas’ protest revealed — again — the fundamental cruelty of the Castro regime. The dictatorship never attempted to negotiate with Fariñas, to strike a deal. More important was the control and power the dictatorship holds over the Cuban people, more important than saving a human life. If Fariñas had not given in to the pleas of family, friends and supporters and ended his protest, he would have died, and the dictatorship would not have given a damn.
And neither, I’m afraid, would much of the world.
But Fariñas is a hero, and has been justly recognized as such.
Late last year, he was named the recipient of a human rights prize awarded by the German city of Weimar. The Cuban government blocked him from traveling to Germany, arguing that he was too weak as he recovered from the effects of his hunger strike.
The real reason is that the dictatorship could not afford for Fariñas, if only temporarily, to be out of its control, free to spread his unfettered message about the reality of Cuba today.
This past week at the German embassy in Havana, Fariñas finally received his prize, which included the equivalent of about $1,500.
Which Fariñas immediately donated to the “Organización Plantados hasta la Libertad y la Democracia,” a Cuban group that supports political prisoners and their families. Fariñas said he had many needs he could address with the money, but the needs of political prisoners were greater.
Fariñas’ survival is bad news for the dictatorship. For from his protest, has arisen a stronger voice committed to informing Cuba, and the world about what is happening on the island — an unshakeable truth standing up to an illegitmate power that is the best of journalism, the best of patriotism.
The dictatorship has tried to intimidate Fariñas, but it has failed. Reports from Fariñas and other journalists with his Cubanacán Press news agency are regularly found on news sites like Payo Libre and CubaNet.
The man is back on his beat, stronger than ever.
(Cross-posted at Uncommon Sense.)