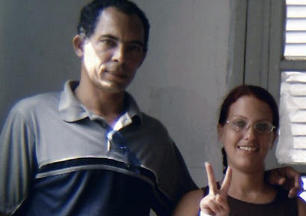 Dr. Ferrer, and his wife (Photo via Encuentro en la Red.)
One of the loudest voices in Cuba against the dictatorship’s apartheid treatment of the Cuban people is Dr. Darsi Ferrer. On Monday, International Human Rights Day, Ferrer, whose courage is unsurpassed, will lead a peaceful protest demanding that all Cubans be treated with dignity and respect. No one knows better than Ferrer that in Cuba, his could be a very dangerous business.
Encuentro en la Red has published a new interview with Dr. Ferrer, in which he explains the significance of Monday’s events:

“We will celebrate the Universal Declaration of Human Rights, and we are not afraid because the Constitution recognizes the freedom of expression. It will be a peaceful march, in silence, against the apartheid suffered by the people, humiliations that we repudiate. Note that here, there is not the horror of ‘whites only’ signs of the United States or the ghettos of South Africa or the concentration camps of Germany.
“It is now more subtle, because it is against everybody. In the 1960s, in the southern United States, there were places for whites, and for blacks. Now (in Cuba), it is for tourists and for nationals. Now you see passing by, people crowded into camellos (a type of bus), and empty luxury buses for tourists. In Havana, there are 103 slums, almost 200 ‘llega y pon,’ where people live in zinc roofs and walls.
“Cuban prisons are worse than Nazi concentration camps. Here, there are 100,000 people, among them political prisoners, who are slowly being killed.”

Read the whole thing, here.
Dr. Ferrer has his own blog, Apartheid En Cuba, but for some reason, nefarious or otherwise, it’s offline this morning. (A commenter explains the problem.)
(Cross-posted at Uncommon Sense.)