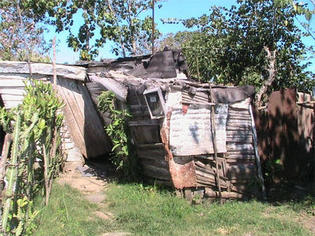 Caridad García Pérez’s home
Jorge Luis García Pérez “Antúnez” is one of the giants of the Cuban opposition.
For more than 17 years, Antúnez was a political prisoner, withstanding the worst the dictatorship could throw at him. His guards tried over and over to break Antúnez, beating him and throwing him in punishment cells. But all they did was strengthen his resolve and his intransigience in the face of tyranny. More than once, he would go on hunger strike to demand that his human rights, and those of other prisoners, be respected.
Since his release last year, Antúnez has continued with the struggle for a free Cuba, despite the toll that prison took on his health. He has participated in numerous protests and other events, and the dictatorship has responded in kind on several occasions by arresting, threatening and then eventually releasing him.

Antúnez also loves his family, which is why on March 11 he started a hunger strike to demand that authorities allow his sister to move from her hovel of a home and into better quarters.
There has been no response from the government, which owns all the housing and controls where people can live, so Antúnez continues with his protest.
Antúnez told Encuentro En la Red that he started the hunger strike after he and his sister, Caridad García Pérez, exhausted all bureaucratic options to find better housing for her and her 11-year-old daughter. The protest also is on behalf of “the thousands and thousands of Cuban families living in difficult conditions for several generations.”
Antúnez said his sister’s house has tilted walls and dirty floors, and a roof that leaks.
“The key feature of the house is that it may collapse at any time and kill my sister and her young daughter, age 11. Both are sick, my sister has heart ailments, the girl is asthmatic. My sister does not sleep, afraid that the house will fall over.
“The case of my sister is representative of thousands and thousands of Cubans facing a situation similar or worse,” Antúnez said.
Antúnez, who is taking in liquids during his protest, said he is not “an addict to hunger strikes. But when the formal channels are exhausted, when you see that there is not an understanding, you have to take a radical position.”
To resolve the situation, a group of prominent Cuban dissidents has signed a letter promising to raise from overseas the money needed to repair Caridad García Pérez’s home.
(Cross-posted at Uncommon Sense.)

2 thoughts on “Antúnez takes a stand for Cuba”