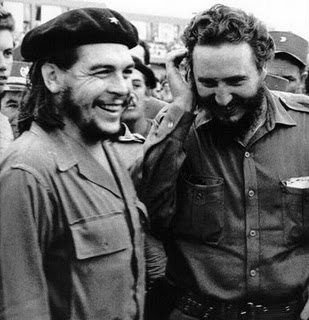 “Right, Che! And so was Herbert Matthews!!!”

“(Phil) Peters, who is vice-president of the Arlington, Virginia-based Lexington Institute, and one of the leading Cuba experts in the U.S”.,

“It’s Carlos Lage (for Cuba’s next President)This is a time when Cuba’s leadership moves toward generational change.” (“Phil Peters, March, 2008)

Update (Val): What riles me the most about pieces like this is the total abandonment of journalistic integrity by the “journalists.”

They quote Phil Peters as THE Cuba expert. This is the same guy that plans and organizes all of the junkets to Cuba by US Politicos and “businessmen” (quite possibly in violation of federal law – The Logan Act). The same guy with ties to Sherritt International – a Canada based “resource” company that currently rapes Cuba’s Nickel from a stolen mine. The same guy that worked for the State Department and is rumored to once have worked for the CIA. The same guy who professes to be against the violation of human rights in Cuba but then rarely, IF EVER, mentions said violations. The same guy that has absolutely no issue with commenters on his blog using the term “gusanos” (the equivalent for us Cubans of using the word “nigger” for blacks) to refer to Cuban exiles. And the same guy who probably used his contacts to A) convince Yoani Sanchez and company to write to Obama and B) convince Yoani Sanchez and company that said letter would be answered should she write a US Congressman a letter asking for travel restrictions to be lifted. The same guy that has always – ALWAYS – advocated the lifting against all sanctions on Cuba and the same guy that I, personally, believe to be fidel and raul castro’s best propagandist.

The same guy who makes absolutely ridiculous statements like:

“It’s one thing to run civil society programs in countries where the local government is unopposed, it’s quite another to do so in a communist country that perceives the program as a national security threat,”

And the “press” take these quotes and plop them in their stories and editorials and pieces as if they were some kind of epiphany, without even noticing (or, possibly ignoring) the sheer ridiculousness of such a statement.

Seriously, what country, other than an oppressive, authoritarian country would actually NEED a civil society program or a human rights program? And, arent new technologies what Yoani Sanchez and her fellow bloggers depend on and state they need more of in order to have their voices heard? Who the hell else is gonna give them these new technologies, Phil Fucking Peters? At what cost? More letters to Congressmen?

Phil Peters is a Cuba expert alright. Expertly proficient in giving the castro regime exactly what it wants without getting anything in return.

Emphasis mine, damnit, because I am one fucking GUSANO that’s tired of this hypocrite and his so called fucking expertise.