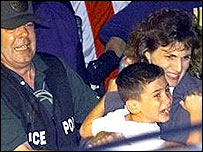 “Thanks to MSM/Democrat/Castroite collusion most people forget (or missed) the crucial legal and ethical details of this circus/tragedy — which were mostly established during the first week after Elian’s rescue at sea, after his heroic mother’s drowning. The “son-belongs-with-his-father” crowd, for instance, “missed” (with the help of the MSM) that Elian’s father was initially delighted that his motherless son was in the U.S. and in the loving arms of his uncles and cousins….So why did Elian’s father change his tune?

Remember Godfather II? Remember the Senate hearings where Frankie Pentangeli, under FBI protection, was prepared to testify against Michael Corleone? The stage was set. Looked like a done-deal for the Feds. Then Frankie looks up and sees his bewildered brother Vincenzo from Sicily, sitting next to Mikey.

Whoops! Frankie sure changed his tune, didn’t he?

Think of Juan Miguel as Frankie Pentangeli. The gun Fidel Castro held to Juan Miguel’s head was as invisible (to those without experience with Communism) as the one Mikey held to Pentangeli’s head was to most spectators at those hearings.”

Must intransigents CONTINUE flogging this long-dead horse!…Must these insufferable people keep piggybacking on this emotional issue at the slightest opportunity to keep bashing the Media and America’s majority political party??!!….GEEEEEZ!

8 thoughts on “What the MSM/Democratic Axis buried about Elian”