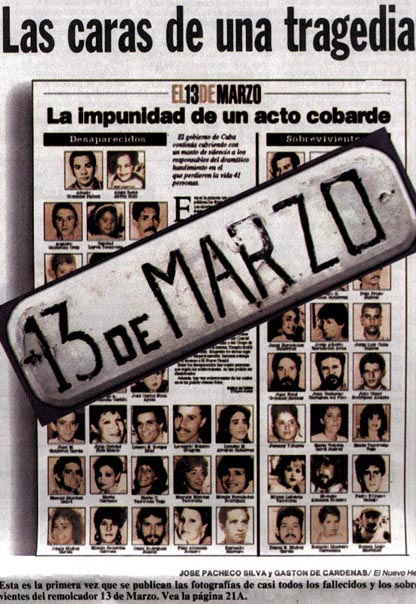 At 3:00am the boat left Cuba. Only 45 minutes passed before three other boats (called Polargos) belonging to Ministry of Transport identified the tugboat. According to survivors, a fourth boat belonging to the Cuban Coast Guard followed behind and appeared to direct the other three boats.

The Polargos tried to sink the 13 de Marzo by using high-pressure water hoses to flood the boat. Locals on a nearby shore were shouting at the Polargos, trying to tell them to stop. The women on the boat made their children visible, hoping that they would stop trying to flood the boat. But the water kept coming. Many of the passengers went into the inner rooms to avoid being struck by the flow of water.

In a very organized manner, the Polargos started ramming the tugboat while continuing to douse them with water. When the 13 de Marzo was half underwater, the Polargos circled the tugboat to create a wake around the boat. Those who weren’t trapped, drowning in the boat, had to fight against the current to stay afloat. Eventually, the Polargos stopped and the survivors were pulled from the sea.

At least 35 men, women and children were killed in the incident.

fidel castro’s government prevented any significant sign of public mourning, protest or grief. A Mass for the victims was cancelled and the relatives were not allowed to throw flowers into the sea to remember the dead. In the eyes of the Cuban government, anyone who attempts to leave Cuba without permission has betrayed the revolution. The government detained organizers who tried to get people to wear colors or armbands in memory of the victims, as well as those who actually dared to wear the armbands.

On following anniversaries of the deaths, the government would continue to cancel Masses, close churches and arrest anyone who tried to mourn the men, women and children who perished on that day.

Eventually, many of those who tried to escape Cuba made a successful attempt and are now in the United States.

Today, this event is seldom talked about in the US. While some tourists portray a heavenly vacationland with a few problems and politicians try to believe the oppression is in Cuba’s very distant past in order to get trade started again, many Cuban-Americans remember the more than 30 victims forced under water and the grief that was never allowed to surface.

From Lasculturas, there’s more here, here, and here, and please watch the video below by cubanexilequarter at YouTube.