Yesterday, Reina Luisa Tamayo, the mother of the Cuban martyr Orlando Zapata Tamayo, was again attacked by Castro thugs when she tried to leave her house to attend church. 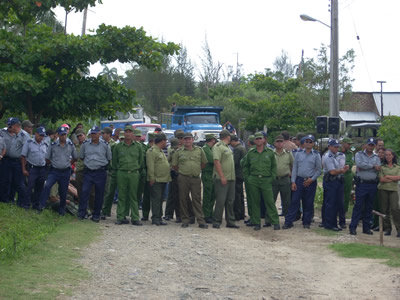 The town of Banes, on the north coast of eastern Cuba, is best known as where Fidel and Raúl Castro were spawned. Before that, it was also Fulgencio Batista’s hometown.

Some of that ignominy has been washed away in recent months as a current resident, Reina Luisa Tamayo, has courageously carried on the legacy left by her son, Orlando Zapata Tamayo, a political prisoner who died Feb. 23 after an 86-day hunger strike.

Señora Tamayo and supporters, like their fellow Ladies In White in Havana, march each Sunday on behalf of Cuba’s political prisoners, from Mass at a local church to Orlando Zapata’s grave site.

And almost every Sunday, goons unleashed by Banes’ bastard sons, the Castro brothers, swarm around Señora Tamayo and her supporters, tossing threats and insults and throwing punches and kicks. The greater their fear of this old woman and her friends, the louder and more dangerous they get.

Reina Luisa Tamayo, however, has remained undaunted, her undying love for her son driving her as she becomes one of the inspirational figures of the Cuban opposition.

It happened again today, as security forces and “common” prisoners brought to the scene by the authorities surrounded Tamayo’s house, on the Embarcadero highway in Banes.

“They were punching us from behind, hitting and kicking us,” Tamayo told Radio Martí. “My son took a tremendous blow to the head.”

Tamayo called on the international community to intervene on her behalf, because “there are going to be very many dead on the Embarcadero highway.”

It’s just a coincidence that Señora Tamayo lives in the Castros’ hometown. But maybe it’s not that even after Orlando Zapata’s death and the bad publicity it brought the regime, the dictatorship has still chosen to physically attack his mother.

Maybe the Castros, especially Fidel, whose public reemergence has coincided with latest attacks on Tamayo, cannot imagine anyone else from Banes as their rival for the world’s admiration.

UPDATED, 6:10 p.m. EDT — Audio of Radio Martí interview with Reina Luisa Tamayo. She is demanding the world hold the Castros responsible for the murder of her son.