Marc Masferrer has more details on the arrest of Luis Felipe Rojas in Cuba. 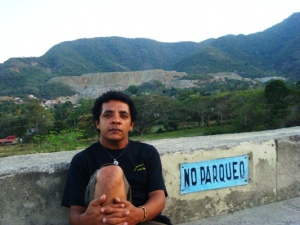 The Castro dictatorship today again offered its endorsement of Cuban independent journalist/blogger Luis Felipe Rojas Rosabal’s work by knocking on his door and taking him to jail.

I call his arrest and detention an “endorsement,” because although all independent journalists and bloggers are at risk of receiving similar attention from the regime, it is especially persistent with its repression towards the more accomplished chroniclers of the reality of life in Cuba today.

Rojas is one of the best on the island, although he is barely known outside Cuba, and for that the dictatorship acts its worst towards him.

Rojas was arrested, detained and released last week. The encore came this morning when police officers came to his home, arrested him and took him to a local police station in the town of San Germán, in the Holguín province of eastern Cuba.

His wife told Radio Martí that police have given her no explanation for his arrest.

I have done what I can to protect Rojas, by linking to his blog and re-publishing his work but not just because he rejects the Castro dictatorship. Although I usually only read English translations of his posts, his work reveals a keen reporter’s eye and a sometimes brutal commitment to telling the truth befitting the most accomplished journalists anywhere.

On that, the Castro dictatorship and I agree.