The repression and crackdown on the opposition in Cuba continues. Where is Super Jaime when you need him? 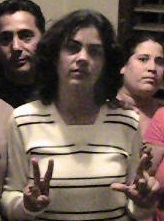 Fonseca and two other activists, Eriberto Liranza Romero and Ermógenes Guerrero Gómez, were demonstrating for the release of eight other activists arrested at the University of Havana and in eastern Cuba last week, when police swept in and took them away. One report stated that Fonseca was literally dragged down a street by police.

Their whereabouts this evening were not known.

Fonseca had also been arrested last week at during the University of Havana protest Aug. 16, along with four other activists. Fonseca and one other detainee were released shortly afterward.

The other five political prisoners had been arrested after protests a week earlier in Baracoa, in far eastern Cuba, demanding the release of two other dissidents who had been arrested — Liranza and another man. Amnesty International this week called for the international community to take “urgent action” on their behalf.

Fonseca is a hero, not only because of her courage and willingness to take her protests against the Castro system to the streets. She is to be doubly admired because she does so on behalf of her fellow freedom fights.

Cuba needs more of its citizens to follow her example.