Finding themselves falling deeper into the abyss of oppression and hopelessness that has defined the existence of Cubans for the past half century, Venezuelans are now finding themselves having to resort to hunger strikes in order to protest the dictatorial rule of Castro protege, Hugo Chavez. One such Venezuelan, Franklin Brito, attempted such a protest, and he ended up paying for it with his life.

Here is the story and analysis via Notes from the Cuban Exile Corner:

Franklin Brito: A Martyr for Liberty and Human Rights in Venezuela

“I’ve learned of the death of hunger striker Franklin Brito. It appears that Hugo Chavez now has his Orlando Zapata” – Yoani Sanchez, August 31, 2010 on twitter 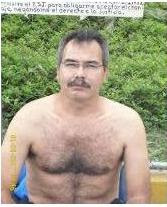 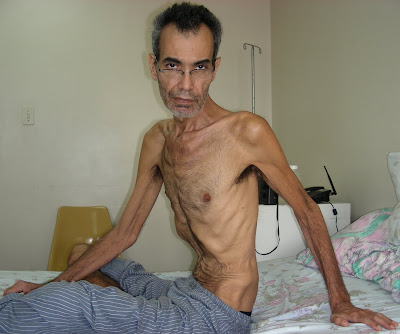 (Above) Franklin Brito before and after engaging in 8 hunger strikes

Hunger strikes are the ultimate recourse in the arsenal of non-violent resistance, and over the years around the world it has succeeded at times but in places like Cuba, Ireland, and now in Venezuela a human being has died on hunger strike.

In Cuba the names of Pedro Luis Boitel and Orlando Zapata Tamayo are remembered as is Bobby Sands of Northern Ireland (who the Cuban dictatorship built a memorial to in Cuba) and now Venezuela’s Franklin Brito has joined this select grouping that demonstrates the ultimate price when engaging in a hunger strike.

Franklin Brito was a farmer and a biologist whose land was expropriated by Hugo Chavez in 2000 according to CNN. Other news agencies place the date of expropriation anywhere between 2003 and 2004. He exhausted every recourse and was driven to the final option: the hunger strike in 2005.El Universal out of Caracas offers a chronology of Brito’s odyssey. In the video below taken October 5, 2009 on day 93 of a hunger strike Franklin was carrying out in which he explains how all of this began:

Despite its widespread violation there is a right to private property enshrined both in the United Nations’ Universal Declaration of Human Rights and the Organization of American States’ American Declaration of the Rights and Duties of Man. It is an internationally recognized human right and clearly stated:

Article 17 of the Universal Declaration of Human Rights states: (1) Everyone has the right to own property alone as well as in association with others. (2) No one shall be arbitrarily deprived of his property.

Article XXIII of the American Declaration states: “Every person has a right to own such private property as meets the essential needs of decent living and helps to maintain the dignity of the individual and of the home.”
When Franklin Brito’s family said that he stood for “the struggle of the Venezuelan people for property rights, access to justice, for living in freedom,” they were simply stating the facts of the matter. In the video below taken on November 19, 2009 Franklin Brito declares that:

The tactics Mr. Chavez is using in questioning the mental stability of his adversaries, and smearing them, even in death, is straight out of his Cuban mentor’s repertoire. Friends and family of Franklin Brito had best organize the facts and evidence surrounding his case protect it and duplicate it so that it cannot be seized and destroyed. They should engage in speaking out anywhere and everywhere to counter the avalanche of slander and libel from regime apologists against a man who can no longer defend himself.

Hugo Chávez has nationalized 2.5 million hectares as part of a “land reform drive.” The so-called reform, combined with increased government control over the economy, has exacerbated food shortages in Venezuela with Chavez forced to step up imports despite abundant land and a tropical climate just like Cuba did years ago.

It is not madness to take extremes in the defense of liberty and justice, but it is madness to repeat the same failed policies that have bankrupted and destroyed nations the world over and expect a different outcome in your own homeland.

“Extremism in the defense of liberty is no vice; moderation in the pursuit of justice is no virtue.” – Marcus Tullius Cicero

*Use of the term tyranny is not a rhetorical exercise but defines what Hugo Chavez’s democratically elected government has descended into a tyranny. There are two dictionary definitions of tyranny which are often related to each other. For example in the case of Cuba with Fidel Castro it is the state ruled by an absolute ruler but in the case of Venezuela it is the “arbitrary or unrestrained exercise of power; despotic abuse of authority” that applies.

1 thought on “A Venezuelan dissident dies of a hunger strike”