Here is another reason we should be thanking Spain for negotiating the banishment of 52 Cuban prisoners of conscience: it alleviates some of the overcrowding in Cuba’s prisons as the Castro regime continues to arrest, and imprison new members of the opposition.

During the month of August, the Castro regime arrested more dissidents than it released (or more precisely, banished to Spain).

According to the Cuban Commission for Human Rights and National Reconciliation (CCDHRN), last month there were 71 documented police raids on dissidents, which resulted in 184 arrests.

Of these, eight dissidents appear to be facing long prison terms — five in the eastern city of Baracoa and three in Havana.

Meanwhile, only six political prisoners were banished to Spain by the Castro regime — and none released in Cuba.

Yet somehow, only the six banishments seem to get general media attention. 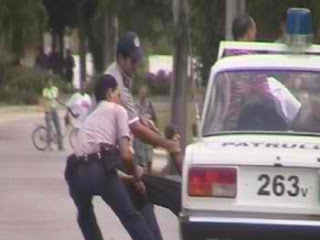 In the meantime, another spot in the Castro gulag has just opened up as another prisoner of conscience has just been banished to Spain.

4 thoughts on “Another reason to thank Spain”