Race promoter Jay Lamm is quite a comedian, or at least he thinks he is. 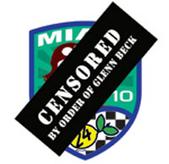 Organizers for an irreverent car race in Palm Beach County had a similarly cheeky way of brushing off recent criticism.

The 24 Hours of LeMons, which races junk cars costing less than $500 in 24-hour endurance races across the country, recently was criticized for using the image of Cuban guerrilla Ernesto “Che” Guevara in promoting its season-ending race in South Florida at the Palm Beach International Raceway in Jupiter.

After agreeing to change the logo and event name – it had been called the 24 Hours of Cuba of the North – the organization posted a new image Friday on its website:

“Censored by order of Glenn Beck” reads a black banner over the original image of Guevara with race goggle hanging around his neck.

Cuban-American race fans, drivers and promoters had emailed the organization, expressing how put off they were by the LeMons using an image that is toxic to the millions of Cubans living in exile.

For Cubans, Guevara is symbolic of a revolution that led to summary trials, executions, and a 50-year dictatorship that continues for Cuba’s Fidel Castro. But the event’s organizer Jay Lamm has said he intended to use the image sarcastically.

“There is no shortage of Offended Parties in the world, and you can’t kill yourself trying to placate every one – particularly since most have no interest in being placated,” he wrote in an email to The Palm Beach Post last week. “If some people take offense at an icon we’re using sarcastically, that’s an unfortunate but natural byproduct of humor.”