The “Mother” of All Dissidents

The following is an excerpt from The Financial Times’ obituary of East German dissident leader, Bärbel Bohley. The last paragraph should serve as a lesson for those pushing to unconditionally embrace the Castro regime in Cuba:

To many east Germans, Bärbel Bohley will always be the “Mother of the Revolution”.

Her soft-spoken, almost girlish voice was the most instantly recognizable sound of opposition to the ruling Communist party in the dying days of the former German Democratic Republic. Her signature was the first on the manifesto of the New Forum citizens’ movement, published on September 10 1989 under the words: “The time is ripe.” Within a matter of weeks, 200,000 names had been added. Two months later, the Berlin Wall came tumbling down.

Bohley, who died this month at the age of 65, was an unlikely revolutionary. A diminutive figure with a constant cigarette in her hand, she was most at home debating the absurdities of the system over endless cups of tea at her kitchen table in the then shabby East Berlin district of Prenzlauer Berg.

But she seemed to be fearless in facing down the dreaded Stasi police and their legions of secret informers. She liked to speak her mind, to the discomfort (and occasional irritation) of many of her friends as well as her communist foes […]

If Bohley and her companions were reluctant revolutionaries, they were also taken aback by the speed of the changes they helped unleash. Their citizens’ movement was swiftly eclipsed in the negotiations for unification that followed, and Bohley never forgave western politicians who preferred to deal with the communist establishment than the dissidents. She feared she would be “crushed” by the party political machines. “I never joined any party in the east, and I don’t want to do it now,” she said. 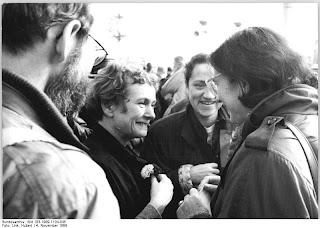 2 thoughts on “The Mother of all dissidents”