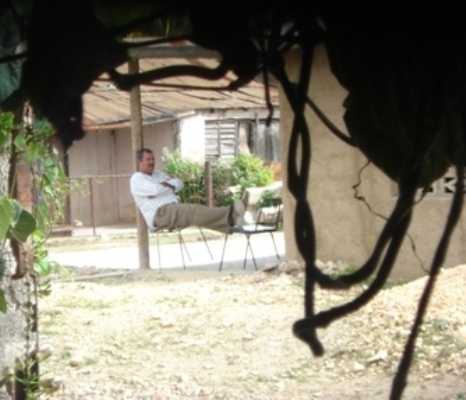 Jose Antonio Triguero Mulet’s house, and my house, have both been watched since Thursday, the 28th of October, despite the fact that they are on the outskirts of town, as I previously reported on Twitter.  But it wasn’t until Sunday, the 31st, that the political police once again found their way onto my porch.

They shouted offensive comments to the owner of the house where I live, a man who is more than seventy-years-old.  They told me to accompany them to the police barracks.  Because I refused to walk with them through the streets and demanded that a car take me instead, Major Charles ordered an officer to bring handcuffs.  On the way to the police station, one could hear the screams of my wife, Exilda, shouting things like “dictators,” “assassins,” and that “one day they will pay for this.”  Such phrases, which I will not dwell on too much, alarmed many of our neighbors, who took to their windows and doors to witness how they jailed a writer, making him walk in front of everyone as if he were a criminal.

This time I spent 9 hours in a dark corner.  I was able to pray a bit, but all the while mobs of mosquitoes literally “ate” me.  Near where I was, there were some prisoners, charged with “aggressions which caused serious injuries to their victims,” and also two brothers who, earlier that day, had attacked someone with a machete.  Another four had been locked up for days because they had robbed a grocery store and taken all the food rations of an entire neighborhood. There was also a recluse who threatened to kill his wife.

And that’s where they put me.  That is the way I was able to see some of the details of how the “national revolutionary police” operates.

I continue being taken to those places without ever having my name written down on the list of those detained.  But every time someone calls my wife to ask about me, she reports me as “missing.”  I don’t want to think that the improper visit of the Municipal Prosecutor, Saili Aranda, and another young military prosecuting officer during the night had anything to do with this.  I leave it up to the reader to decide, but I must say that the guards did nothing about it.

From the early morning hours I had been reporting, through Twitter, about the “Zapata Lives” march which was occurring in Banes.  Later, I gave details about the beatings and arrests of the activists from the Eastern Democratic Alliance, who once again accompanied Reina Luise Tamayo in Banes.  Right after my arrest, my cell phone was no longer able to receive calls or text messages, and I could not send out any either.  Outside friends told me that when they would call the number it would give a busy tone and then a message would come on saying that the number dialed did not exist.  And I must add that no one, from anywhere in the world, has been able to “re-charge” my phone because it simply “does not go through.”

In a little while, I will be on my way to the commercial offices of Cubacel.  I want to hear them, in their own voices, explain to me which part of the contract — which the Cuban government itself actually authorized between nationals and the cell phone company — I violated, and which of these clauses is the one that has allowed them to jail me, restrict me, and trample on my right to my rights.