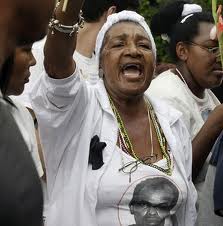 Brauilio Cuenca Cruz was the one who told me about it. He said he was fined in the amount of 30 pesos just for publicly expressing his nonconformity with regards to the Cuban health system. This occurred during the meeting of Popular Power, which took place in the small town of Antilla, where he claimed his right to criticize the skyrocketing cost of the neonatal services in the municipal hospital of that town.

Braulio added that there were leaders of the party and of the government present in the meeting. At the conclusion of the assembly, he was approached by a police officer who imposed a fine on him for “supposedly” wanting to sabotage the government meeting.  A native of Antilla, Cuenca Cruz, assured me that he will not pay the fine and he knows that because of this he will run the risk of having the fine increased. He says he is doing it to be persistent, and that for believing in justice he will have to go to trial to demand his rights. He feels that he has the right to freely express himself, even if it is in front of those who run the country and the municipality.

I did not tell him my opinion about his intention to speak out against the fine, because I don’t find it appropriate that I induce people to make certain decisions. I remember that, not too long ago, my wife took some “legal” (if you can refer to something in my country in that way) steps. We turned in some formal demands to the Provincial Fiscal Office, and in a matter of little time they cited me to appear at their hermetical offices of Holguin. The results of that citation are known to my readers, for I described it here on my blog.

But since I do not want to feel guilty for not warning the rest, I read the report which the Guantanamo native Anderlay Guerra Blanco posted just a few weeks prior in the blog El Palenque.

Dolin Dachao Alexander expressed his sentiments against the Cuban dictatorship from the roof of his house itself during an Assembly of Popular Power which took place in his hometown. He began to shout, “Down with the dictatorship! Down with Fidel Castro! Down with Raul Castro!” in front of all those who were present.

He was immediately detained and shoved into a police car, which would take him to the provincial unit of State Security operations.  In the popular tribunal of that city, they carried out a trail for him because of supposed lack of respect in the cause of 20/2010.  When they sentenced him with 10 months of forced labor, Dolin responded with the same exact words which got him jailed in the first place.

On the 13th of April of this year, a new trial was carried out for Dolin at the theater of the Combinado Prisons of Guantanamo. This time, he was being tried for disrespecting those at the tribunal due to the words he spoke against the regime during the last trial.  His relatives were not present. Only soldiers presided over the Roman Circus. They added 10 months more to his punishment, this time to be served under imprisonment. Dolin was not frightened, and he once again shouted, “Down with the dictatorship! Down with Fidel Castro! Down with Raul Castro! Justice for the Cuban people!”

I remember all the times my wife has shouted those same phrases to the police when they have come to detain me. She knows the risks she runs, and yet she does not hesitate to express what she thinks of them. I recall the stories of Caridad Caballero, Marta Diaz Rondon, Idalmis Nunez, and all my compatriots from the Alliance, Rolando and Cristian Toranzo, when they all detailed to me what they lived through within the “instruction centers” of Pedernales, where they also screamed for freedom at the top of their lungs. The women showed me their bruised lips, products of beatings against them intending to shut their mouths.

I remember Reina when she told me, “With a piece of cloth soaked in gasoline they covered my mouth, for they were trying to asphyxiate me so I would not scream ‘Zapata lives, and the Castros murdered my son.’”

2 thoughts on “Just for Expressing Disagreements”