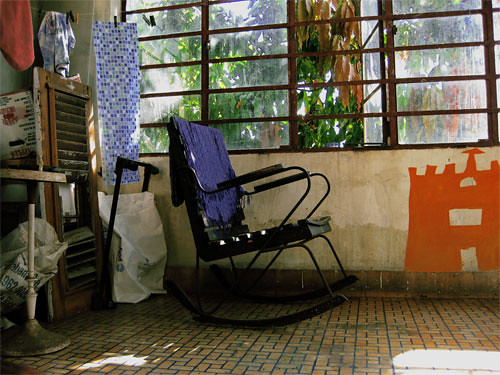 I still remember how at the height of the Special Period my house was deteriorating before our eyes. The walls were peeling, the lights gradually burned out, the wood of the doors and windows buckled, and in general everything became impoverished too fast for my child’s mind to fathom. At times I wondered why the world was becoming so ugly with the passing of time, and it was not a subjective reflection. I never got an answer. That’s also when the messiness started. It seemed that things didn’t “go” anywhere: there were boxes, clothes, papers and junk everywhere. The worst of it was that the same thing was happening outside, as well.

My mother, for her part, never stopped trying to mark the space with what she called “change.” Once a month she would rearrange all the furniture in the house. The same easy chair with the rotted bagasse would be found at the entrance to the apartment in January, next to the telephone in February, between the living and dining rooms in March, and in April it would be on the balcony. The neighbors were moved by her perseverance and sometimes when they visited us they would exclaim, “But everything looks new! How do you manage it?” Now that the years have passed, that sentence sometimes makes me strangely sad: she, helpless before the collapse of the world represented by her home, moving things from one place to another, as if she could stop the inevitable impoverishment; and me, super happy at her side, proud to have a magician for a mother while the condescending neighbors patronized the illusion we threw over our growing poverty.

I was always grateful to her for having tried, without wavering for an instant, to light up my life in the midst of so many grievances: not having school shoes, not having winter coats, not having milk in the morning, and, finally, having absolutely nothing at all. If I were in her shoes for one day I hope I would have the aplomb to act toward myself and toward others exactly as she did. Even so, I can’t understand now, after so long and from my adult point of view, that we fed on an infinite placebo that never solved any of our problems and that, if I look at it from a larger context, is the same placebo that is consuming our nation; changing exactly that which doesn’t change anything.