Did Hugo Chavez just stage a coup in Venezuela?

1. Breakthrough coups – In which a revolutionary army overthrows a traditional government and creates a new bureaucratic elite.

2. Guardian coups – The stated aim of this form of coup is to improve public order, efficiency, or to end corruption. There is usually no fundamental shift in the structure of power, and the leaders of these types of coups generally portray their actions as a temporary and unfortunate necessity.

Venezuelan President Hugo Chavez is taking decree powers for a year in a move he says is needed to deal with disastrous floods but opponents denounce as a calculated blow to democracy.

Did Chavez stage a coup?

Will the OAS denounce Chavez’s coup as a violation of the Inter-American Democratic Charter? 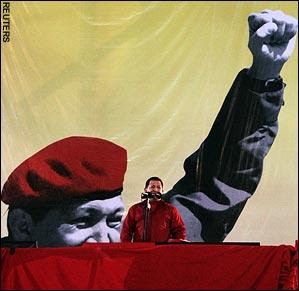 2 thoughts on “Did Hugo Chavez just stage a coup?”