The lecturer on the video showing a Castro conference given to high-ranking MININT officials on how to stop Cubans from getting a taste of internet freedom has apparently gotten a taste himself of internet freedom. The speaker is apparently an ardent fan and user of Facebook and Twitter, which Cubans in general are prohibited from accessing. And thanks to his prolific and frequent use of these social media sites, we now know his name is Eduardo Fontes Suarez, and a lot of other information. 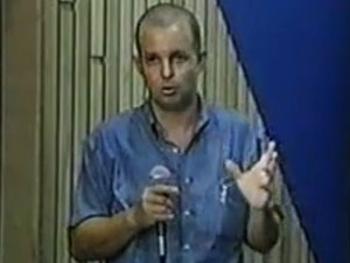 The lecturer in a Cuban government video on the dangers of the Internet has been identified — on the Internet — as a 38-year-old counter-intelligence official who follows blogger Yoani Sánchez on Twitter. Eduardo Fontes Suárez’s Facebook page is now down.

But photos of him as a teenager and details on his education and the Havana neighborhood where he lives have been appearing in blogs about Cuba.

The video, which began getting attention Thursday on the Internet, showed an unidentified lecturer speaking to an audience of Interior Ministry officers about the dangers that the Web presents to the Cuban government.

“The Internet is a field of battle,” the lecturer declares as he argues that the U.S. government has tried at least since 2008 to use the Web to subvert the Cuban revolution.

Fontes Suárez is a 38-year-old computer engineer who joined the Interior Ministry’s counter-intelligence section after he graduated in 1990 or 1991 from Havana’s Vladimir Ilich Lenin high school, which is reserved for the children of Cuba’s ruling elites, according to comments posted by visitors to the blogs.

He is the son of a lieutenant colonel in the Interior Ministry’s State Security Directorate — in charge of domestic security — and now lives in the Havana municipality of San Miguel del Padrón, according to the posts.

He’s married to Beatriz Basabe, a biochemist who works for the Nutrition and Food Hygiene Institute in Havana, where she carries out nutritional studies, according to another comment.

Amazing what one can find out with just a few clicks on the internet. No doubt, Fontes Suarez must feel as violated as the Cubans he has helped to repress and brutalize, and that is good. He deserves a taste of his own medicine.

For those who may be interested, Café Fuerte has gone to the painstaking trouble of transcribing the entire conference and you can download it HERE.

On another related note, in WIRED we find out that the U.S. military has the capability of providing internet access to a country that has access blocked by a totalitarian regime.

The U.S. military has no shortage of devices — many of them classified — that could restore connectivity to a restive populace cut off from the outside world by its rulers. It’s an attractive option for policymakers who want an option for future Egypts, between doing nothing and sending in the Marines. And it might give teeth to the Obama administration’s demand that foreign governments consider internet access an inviolable human right.

Arquilla, a professor at the Naval Postgraduate School, spent years urging the military to logic-bomb adversary websites, disrupt hostile online presences, and even cause communications blackouts to separate warring factions before they go nuclear. What the military can turn off, he says, it can also turn on — or at least fill dead airspace.

Consider the Commando Solo, the Air Force’s airborne broadcasting center. A revamped cargo plane, the Commando Solo beams out psychological operations in AM and FM for radio, and UHF and VHF for TV. Arquilla doesn’t want to go into detail how the classified plane could get a denied internet up and running again, but if it flies over a bandwidth-denied area, suddenly your Wi-Fi bars will go back up to full strength.

“We have both satellite- and nonsatellite-based assets that can come in and provide access points to get people back online,” Arquilla says. “Some of it is done from ships. You could have a cyber version of pirate radio.”

Sounds to me like the easiest way to help the Cuban people on the island without rewarding the regime.

Of course, those “Cuba Experts” will say this would be considered an “act of war,” to which I respond, so what? Haven’t you been telling us all these years that the Castro regime is not a military threat to the U.S.?

2 thoughts on “A taste of the internet”