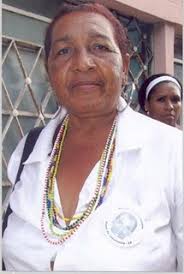 Reina Luisa Tamayo was beaten and arrested early this morning by Castro police. DIARIO DE CUBA has the report (my quick translation):

State Security informed an activist that the mother of Zapata is “under investigation.”

Reina Luisa Tamayo Danger, the mother of the deceased political prisoner Orlando Zapata Tamayo was “violently arrested” in the morning hours of this Friday by officers of the State Security, the Directorio Democrático announced.

“Along with Reina, her husband Jose Luis Marino Ortiz, and the activist Daniel Mesa Cantillo were beaten and arrested,” added the organization headquartered in Miami.

The activist Ernesto Mederos Arrozarena informed via a telephone call to the organization that Tamayo Danger is currently being detained by State Security in the city of Banes.

“At the same time that the detentions and beatings were taking place, Daniel Mesa Cantilla was able to make a telephone call to family members of Reina, who informed Mederos Arrozarena of the events,” the exile organization said.

An official from State Security communicated to Mederos Arrozarena that Reina Luisa Tamayo is currently detained and “under investigation.”

The cell phone belonging to Zapata’s mother was not working, as confirmed by DIARIO DE CUBA. Her youngest son, Jose Luis Ortiz, informed this daily that the police arrested her for supposed “lack of respect” when Reina Luisa Tamayo protested the blocking of opposition members from entering Banes to commemorate the anniversary of Zapata’s death.

This Thursday, Reina Luis Tamayo told DIARIO DE CUBA that the United States had granted political asylum to her and 12 other family members. She also denounced the military siege that has surrounded Banes as the first anniversary of her son’s death approaches.