The first thing dictators do after they muzzle free speech is imprison or murder anyone that can challenge their grip on power. It was the way the Castro mafia did it in Cuba, and it is the same game plan being followed by Venezuela’s dictator, Hugo Chavez.

Unable to make the sweeping changes in a short period of time his idol Fidel accomplished in Cuba back in 1959, Chavez has had to take a slower approach, but a tyrannical and despotic one nonetheless. He has imprisoned businessmen, political opponents, and even a judge who dared to rule against him. Like Cuba, the world has for the most part looked away from Venezuela, preferring to make believe nothing is happening. But Chavez’ antics are beginning to prove too extreme even for the U.N.

A jailed judge pays the price for defying Hugo Chávez

BIAGIO PILIERI, a former journalist and mayor, was until recently little known in Venezuela. But last September he 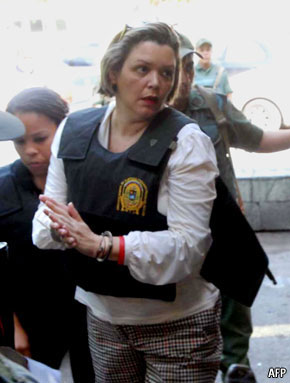 was elected to the National Assembly. He has been unable to take his seat because, despite parliamentary immunity, he is under house arrest, awaiting trial for the third time on corruption charges of which he has already been cleared.

Mr Pilieri is just one of more than two dozen Venezuelans that opponents of President Hugo Chávez say are political prisoners. They include two other elected representatives. Thousands of opposition supporters have been subjected to political persecution, ranging from loss of government jobs to pursuit through the courts. Some have fled abroad.

The most prominent of the exiles is Manuel Rosales, the opposition’s presidential candidate in 2006. A corruption case against him, shelved for lack of evidence, was revived by Mr Chávez in 2008 during regional elections. “I am putting myself at the head of Operation ‘Imprison Manuel Rosales’,” Mr Chávez told a cheering crowd of supporters. After being elected as mayor of Maracaibo, Venezuela’s second city, Mr Rosales sought refuge in Peru, which has also granted asylum to several other opposition figures.

The government says all those on the opposition’s list are common criminals. Until now, international bodies have not challenged that view. But the case of María Lourdes Afiuni (pictured), a judge who has been in jail since December 2009, is starting to attract condemnation.

Ms Afiuni’s offence was to have ordered the release of Eligio Cedeño, a banker who was another self-declared political prisoner, on the grounds that he had been detained for almost three years without trial. In doing so, she was not only applying Venezuelan law (which limits pre-trial detention to no more than two years) but also a declaration on Mr Cedeño’s case by the United Nations Working Group on Arbitrary Detention.

Mr Chávez saw things differently. The day after her arrest, the president called her a “bandit” and demanded she be imprisoned for 30 years. She was locked up in a two-metre by three-metre cell, 24 hours a day, in a jail which also housed violent offenders she herself had sentenced. Her health deteriorated. The UN working group added her to its list of the arbitrarily detained and the Inter-American Commission on Human Rights called for her to be tried or released. After she had a medical operation this month, she was granted house arrest. But she may be sent back to jail after convalescing.

Her case is merely the most cruel instance of the pressure applied to judges and prosecutors. Human Rights Watch concluded in a report in 2008 that Mr Chávez had “effectively neutralised the judiciary as an independent branch of government”. The official version, expressed recently by Fernando Vegas, a supreme-court justice, is that judges must “apply the law severely in order to punish conduct …that negatively affects the construction of democratic, Bolivarian socialism”.

Two dozen people, most of them students, are staging a hunger strike in Caracas and Maracaibo in support of the dissidents. As well as demanding fair trials and respect for parliamentary immunity, they are calling on José Miguel Insulza, the secretary-general of the Organisation of American States, to intervene. A year ago, in response to a previous hunger strike, Mr Insulza said he would go to Venezuela to investigate. But since the government refuses to invite him, he cannot visit. And Ms Afiuni, Mr Pilieri and their fellow prisoners remain in detention.

4 thoughts on “Venezuela continues its plunge into Cuba-style tyranny”