Since the very beginning, the Castro regime has invested many resources and concentrated their efforts in infiltrating any groups they feel are a threat. The dissident movement in Cuba is rife with Castro agents looking to expose the opposition in Cuba and obtain information on them and their plans.

Café Fuerte has a report (in Spanish) on two of these agents, whose identities the regime has decided to reveal. Remember the names, and remember the faces. These two men have no doubt been responsible for gross violations of human rights in Cuba. 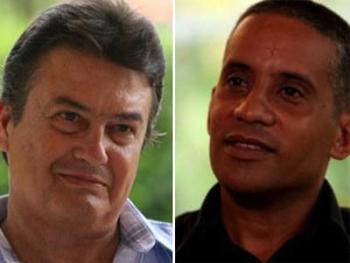 Carlos Serpa Maceira, agent “Emilio,” and Moisés Rodríguez, agent “Vladimir,” were presented this past Saturday night on a Cuban television special titled The Peons of the Empire.

Both identified themselves as agents for State Security who worked within the opposing political activist groups and independent journalists.

The television program is part of a series titled Cuba’s Reasons, dedicated to showing the supposed subversive acts and terrorists attacks faced by the Cuban nation.

Of the two agents, the best known is Serpa Maceira, whose reports were featured most often on Radio Marti, Radio Mambi, and Cubanet based in Miami. During the past five years, he maintained a systematic presence alongside the Ladies in White, and he was considered their spokesperson.