Band-aids to Save a Country 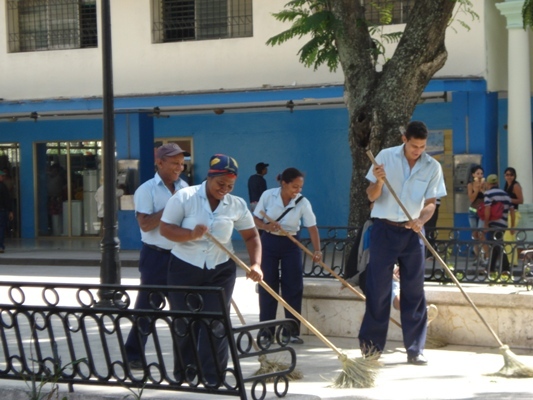 The Council of Ministers of Cuba expanded its quorum in order to hold a session this past February 28.  Nearly 30 thousand proposals were already calculated in the meetings to discuss the lineaments, and now the olive-green leaders are rushing to put band-aids on the wounds of the battered Cuban society.

Now, it turns out that the layoff process is not the purpose, but instead it is an attempt to recover some unknown sort of efficiency.  After 52 years of arbitrary administration, the ruling hands have been informed about the worst evil present in the Cuban ecosystem.  Thousands of acres of untouched lands destroyed with the purpose of establishing fields of sugar cane, which are no longer of economic interest, leading to a grave mistake which is now very difficult to fix.  The charred and salty ground has lost its fertility.  The effects of this are present for everyone to see.  The full-blown process of establishing a system of hotels with better beaches in nearby keys has dried out natural lakes, lost a great amount of sand, and destroyed much of the vegetation along the Cuban coasts.

This is how the next planned Communist congress in April has designed its agenda.  Now, we will have to believe that we have benefited, and continue benefiting, from the economy of an Old Havana which was saved by the sacrifices of the messianic Eusebio Leal.  The trained forces of the National Revolutionary Police, which are stationed in the historic district, have not had much training in the area of safeguarding peace among the population.  Instead, they have had more experience in the field of harassing their own citizens who approach tourists in an attempt to get their hands on any crumbs, establishing a friendship, or engaging in simple human communication.

In the past few days, I have seen trucks full of workers and professionals heading toward fields of sugar cane in an attempt to “change jobs” or join in on “voluntary labor”.  This is happening in various Eastern provinces of the country.  It’s the new institutionalized blackmail strategy aimed at those who will attempt to enhance their standing before the massive layoffs arrive.  It’s the open door for those who are laid off.

We must be very attentive, for these are the whip lashes of a country, of a government which looks out for itself in the midst of a crisis… which has been going on for more than 50 years.

2 thoughts on “Band-aids to Save a Country”