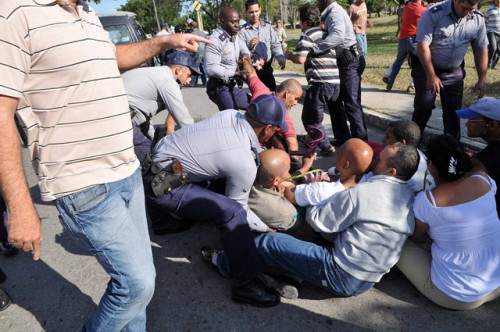 In the month of February, the Castro dictatorship registered what is being called a record 390 detentions and arrests of members of the opposition. This high number of blatant violations of the human rights of Cubans by the regime comes from a combination of fear and desperation on the part of the Castro government, and the courageous determination of peaceful democracy activists on the island willing to risk it all for liberty and freedom.

Via Diario de Cuba (my translation):

The National Cuban Commission for Human Rights and Reconciliation (CCDHRN) reported this Thursday that at least 390 members of the opposition were detained this past February on different occasions, the majority of them linked to the manifestations that took place on the anniversary of the death of prisoner of conscience Orlando Zapata Tamayo.

This is “the highest number of politically motivated detentions in the month of February in the Western Hemisphere,” the commission stated according to Europa Press.

All of the arrests were temporary. In other words, for several hours or days.

The CCDHRN has recorded a total of 113 incidents that are considered “human rights abuses” on the part of “repressive agents of the Raul Castro regime, with the majority taking place between the 21st and 24th of February in the provinces of Villa Clara, Havana, Santiago de Cuba, Holguin, and Guantanamo.”