In a twist of the old adage, it appears that every rat has his day. The two rats (informants) sent by the Castro dictatorship to infiltrate opposition organizations on the island have been honored with “journalism awards.” Of course, their real award will come when Cuba is free. At that time, all those who participated in the brutal repression of the Castro regime, including these two rats, will face justice. 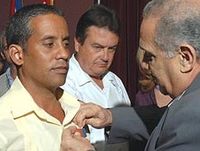 hailed on Saturday by the Union of Cuban Journalists (UPEC), the newspaper Juventud Rebelde reports.

The two men were presented with the Félix Elmuza Distinction, the UPEC’s highest award, and inducted as full members of the Union. (For background, read our Feb. 27 posting “Security agents reveal themselves…”)

For many years, Serpa (“Agent Emilio”) infiltrated the Ladies in White and Martínez (“Agent Vladimir”) penetrated the Cuban Commission for Human Rights and National Reconciliation and reported on the groups’ activities to the Interior Ministry’s counterintelligence agency.

(PHOTO SHOWS Serpa receiving the award from Alberto Alvariño, vice president of the Ideology Department of the Central Committee of the Communist Party. At center, rear, is Martínez.)

4 thoughts on “Every rat has his day”