Since the beginning, the Castro regime has been infamous for their manipulation of information and statistics. From the mythical 10-million ton sugar harvest to the supposititious life-expectancy numbers Castro apologists love to tout: the Castro regime has never met a number they cannot fudge.

The dictatorship’s spurious propensity for manufacturing statistics is matched only by their shamelessness, as Capitol Hill Cubans points out:

On February 17th, we posted our concerns about a 6% decline in registered “legal entities” operating in Cuba between 2005-2011.

This statistic was based on data from Cuba’s Office of National Statistics (ONS), which also showed that the only type of registered entities that actually grew during this period (by 20.7% to be exact) were those directly controlled and operated by the regime.

Thus we asked — where’s all the self-employment and supposed private economic activity that the media obsessively reports on?

Is it operating in “illegality” — if operating at all?

However, instead of legalizing private business activity or actual property rights for the Cuban people, Castro has simply decided to further centralize (and manipulate) “inconvenient” statistics.

So last week, the Castro regime officially announced (by overnight decree) the creation of a new statistics office, the System of Government Information, which will replace the ONS, and will be personally directed by “President” Raul Castro.

You simply can’t make these absurdities up.

Here’s the AP (in Spanish) story. 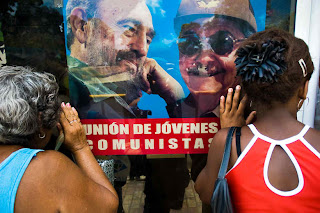