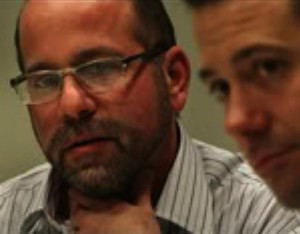 The Blaze has busted open a nasty can of worms that will more likely than not go either unnoticed or discredited/demonized by the MSM, and fully un-investigated by the Department of Justice … as these are the very people that not only put this administration into power, but are fueling the 2012 re-election of Obama.

A former official of one of the country’s most-powerful unions, SEIU, has a secret plan to “destabilize” the country.

The plan is designed to destroy JP Morgan, nuke the stock market, and weaken Wall Street’s grip on power, thus creating the conditions necessary for a redistribution of wealth and a change in government.

The Blaze procured what appears to be a tape of Lerner’s remarks. Many Americans will undoubtely sympathize with and support them. Still, the “destabilization” plan is startling in its specificity, especially coming so close on the heels of the financial crisis.

Lerner said that unions and community organizations are, for all intents and purposes, dead. The only way to achieve their goals, therefore–the redistribution of wealth and the return of “$17 trillion” stolen from the middle class by Wall Street–is to “destabilize the country.”

Lerner’s plan is to organize a mass, coordinated “strike” on mortgage, student loan, and local government debt payments–thus bringing the banks to the edge of insolvency and forcing them to renegotiate the terms of the loans. This destabilization and turmoil, Lerner hopes, will also crash the stock market, isolating the banking class and allowing for a transfer of power.

Lerner’s plan starts by attacking JP Morgan Chase in early May, with demonstrations on Wall Street, protests at the annual shareholder meeting, and then calls for a coordinated mortgage strike.

Not to forget, Obama’s latest Chief of Staff is the former vice chairman at JPMorgan Chase, William Daley.

Of interest, people are finally fighting back against America’s biggest union thugs:

It’s about time! I’ve been yelling “RICO” for a few years.

More legal thoughts on all of this here. And more SEIU-in-action video here.