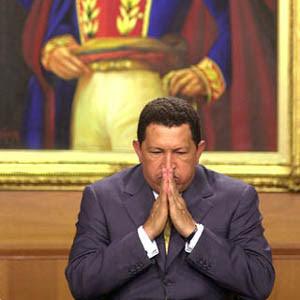 Perhaps Jabba The Hutt should write a diet book … No! He should do an exercise video. Jane Fonda could produce and direct it.

Chavez has lobbied in recent weeks against what he calls the evils of capitalism, including alcoholism, breast implants and violent television programs.

“Be careful with weight gain!” warned Chavez on Sunday, speaking during his weekly television and radio program. “We are eating better, that’s been proven. We’re leaving malnutrition behind. It no longer exists in the country, but be careful with obesity.”

Chavez — who often dispenses advice to supporters during his marathon speeches — said he’d start a campaign to urge Venezuelans to consume less fatty foods and eat in a healthier fashion.

The former paratroop commander has taken issue with doctors who “convince women, many women — not all of them — that if they don’t have big bosoms, they should feel bad.”

Chavez frequently rails against capitalism. Since taking office in 1999, he’s preached against supposed capitalist-fueled vices ranging from alcohol to cholesterol, vowed to curb whisky imports and ordered beer trucks off the street.

Some Venezuelans were amused when one of Chavez recent commentaries took an interstellar turn last week, when he raised the question of whether capitalism had destroyed life on the planet of Mars.