Why the Castros Love Carter

“He has been the best U.S. President.”

So why are the Castros so infatuated with Carter?

As you may recall, during his time in office (1977-1981), Carter essentially normalized relations with the Castro regime. He set up Interests Sections in D.C. and Havana, allowed unfettered tourist travel and even permitted trade through third-country subsidiaries. (A good reminder for those that criticize the embargo in holistic terms).

Easing sanctions was actually an anomaly for Carter, as he was one of the most sanctions-prone Presidents in U.S. history.

The problem was that Carter mostly applied sanctions based on his ideological bias — dictatorships of the right got sanctioned, while those of the left were embraced.

And what did Castro do with Carter’s embrace?

He used it as a green-light to embark on military adventures throughout Africa and Central America, which cost thousands of lives and countless suffering.

But that’s not all. When Castro’s regime was plagued with domestic unrest — Carter was there to extend an escape valve, which would become known as the Mariel boat lift.

As if that weren’t enough — since Carter was so kind to relieve the regime’s domestic pressures, Castro also took the opportunity to infiltrate his criminals and narco-traffickers amongst the majority of decent Cubans that were simply searching for freedom.

Yet, Carter still believes Fidel to be his “old friend.”

So now, as the Castro brothers face the gravest economic, political and social crisis of their rule, they invite their favorite U.S. President back to the island.

And after three days of loading up on talking points from the Castro brothers (with a brief recess at the very end to talk with a group of dissidents — who were curiously urged to be discrete by Carter’s aides beforehand), he proceeded to regurgitate all of Castro’s talking points.

For those impressed that Carter met with dissidents at the very end of his visit — consider that he did so at the last minute, only for an hour and right before he delivered remarks on Cuban state TV.

In other words, he checked a box while knowing exactly what he was going to say from two full days of “briefings” with the Castro brothers and their minions.

He didn’t even have time to “ponder” on the dissident’s views.

Of course, one can’t help feel disappointed by his failure to call for the freedom of the Cuban people or to challenge the brutal oppressors to respect the universal human rights he claims to champion.

But no one should have been surprised. 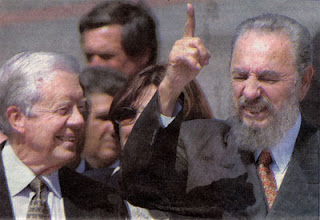 1 thought on “Fools in love”