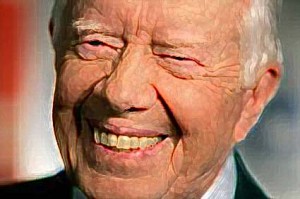 Let’s face it, outside of Miami-Dade, the terms “Cuban-Five”, “Wasp-Network”, “Brothers to the Rescue” draw a complete blank from most of our American friends (not that we aren’t Americans, but you know what I mean.)

Even among conservative Carterphobes our outrage at the Cuba visit might seem overblown, misplaced, and perhaps even “extremist”. Our friends at Breitbart help explain the issue… and ya gotta love their Carter pic.

“In Cuba Carter also took time to visit and console some bereaved Cuban families. According to the Black Book of Communism (no outpost of the vast-right wing conspiracy much less of the “Miami Mafia”) Carter’s Cuban hosts murdered 12-14,000 Cubans by firing squad. According to Freedom House over half a million Cubans have suffered in Castro’s various Gulags, dungeons and torture chambers, an incarceration rate higher than Stalin’s. According to the scholars and researchers at the Cuba Archive, the Castro regime’s total death toll—from torture, prison beatings, firing squads, machine gunning of escapees, drownings, etc.—approaches 100,000.

So President Carter would seem to have little trouble in finding bereaved Cuban families to meet. And he did meet the grieving families of some Cuban-born prisoners. But these prisoners were serving time in U.S. prisons, after conviction by U.S. juries for espionage against the nation that elected Jimmy Carter President and for conspiracy to murder his fellow citizens. These Cubans, you see, are the ones who tugged at Carter’s heartstrings.

Some background: On September 14, 1998, the FBI uncovered a Castro spy ring in Miami and arrested ten of them. Five were convicted by U.S. juries (from which Cuban-Americans were scrupulously excluded) and became known as “The Cuban Five” in Castroite parlance.

According to the FBI’s affidavit, these Castro agents were engaged in, among other acts:”