The Free Cuba Foundation has the report and Ferrer Garica’s urgent call for help:

Please read below this important message received today. This is an URGENT matter and I encourage everyone to raise awareness on behalf of the dissident movement in Cuba.

Free Cuba Foundation is calling for an immediate cease and desists from threatening or assaulting Jose Daniel Ferrer Garcia or any activist within Cuba expressing their universal right to nonviolent resistance!

The following is a message sent by Luis Enrique Ferrer Garcia today after speaking with his brother Jose Daniel in Cuba. The text is both in English and the original Spanish and comes direct from Cuba’s opposition movement. 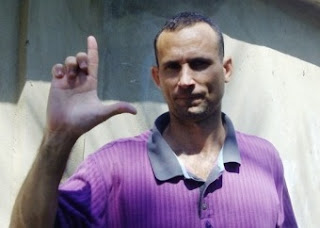 Urgent Message from Luis Enrique Ferrer Garcia about his brother Jose Daniel:
Urgent, Jose Daniel Ferrer Garcia in imminent danger of being assaulted by members of the rapid response paramilitary brigades of the communist dictatorship of Cuba. In these moments he is at the home of Papito threatened by the paramilitaries armed with metal bars and other blunt objects. Led by the well known informer Roberto Gomez, a.k.a “Rondon.” Jose Daniel, one of the last two released from the [group of] the 75 and now under parole. After completing his call with me on the telephone from the home of Maximilian Sanchez (Papito), a brother in the struggle, he was on his way home. He could be attacked, if he has not already been. Please speak up for those who do not have a voice. Solidarity with this Cuban patriot. We await your statement. Forward!

Original message in the original language below: