From Slavery to Feudalism

For the last five decades, the Cuban people have been the legal property of the State — which they are forced to obey.

That’s the definition of slavery.

Pursuant to the CCP (and Raul’s “reforms”), the regime will now allow a very small and select number of Cubans to lease some nominal autonomy from the State (in the form of self-employment licenses).

At best, these “reforms” are akin to medieval feudalism, whereby the lord (Castro brothers) holds all land in fief or fee, in exchange for homage and services by the vassals (the Cuban people).

Thus, for 98% of the Cuban people, nothing has changed. Meanwhile, the 2% with nominal autonomy are “progressing” from slavery to feudalism.

Such “progress” might be appropriate for the Dark Ages — but not in the 21st century.

That’s why it’s so insulting when media outlets and “experts” laud such degrading “reforms.”

As the Corpus Juris Civilis — the body of law discarded throughout the Dark Ages, but whose re-emergence led to the Enlightenment, the end of feudalism and remains one of the founding documents of western legal tradition — reads:

That means — Liberty is an inestimable (beyond all price) good. 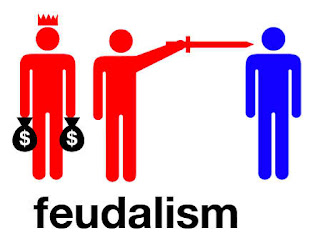