The official communication media enjoy press freedom to defend the system, to violate the rights of citizens, and to defame, because its owner — the Socialist State — offers them total impunity. 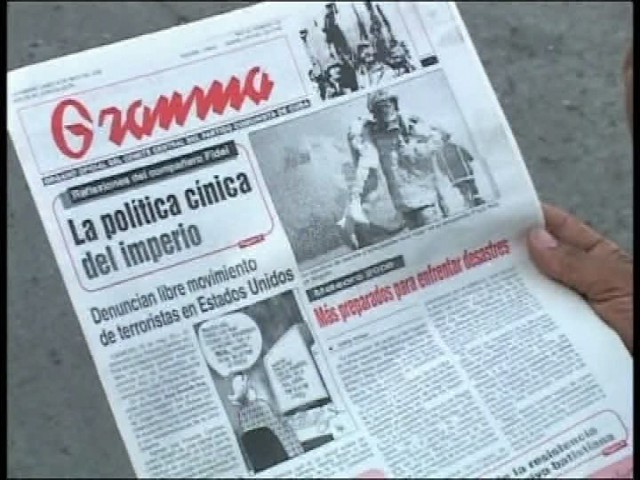 In the period from February 26th to April 4th of this year, Cuban TV premiered 5 chapters of the “accusation series named ‘The Reasons of Cuba’”, in which analysts from State Security participated and vilified the use of new information technologies.

In an attempt to “unmask the mercenary character of the provocations caused by small groups through important testimonies and revelations”, they unmasked 6 infiltrators which were gently referred to as undercover security agents.

The Granma newspaper also played its part.  On the day following each transmission, they published reports which complemented the programs.  Both massive media outlets employed harsh classifications towards the members of civil society who use the internet as a means of expression.

The television, as much as the press, tried to justify the existence of a conflict with the North-American nation in order to keep a constant climate of threat and war which has accompanied the Cuban people for more than 50 years.

In their attempt, perhaps they did not consider the consequences.  Perhaps they did.  The terms used imply grave accusations including calling the dissidents mercenaries and terrorists. Both activities, regulated in the penal legislation, constitute crimes against State Security, with sentences which range from 5 to 20 years in prison.

For example, “Mercenary”, which is a more widely used term, can be punished by the death penalty, a practice which was supposed to be suspended as of April 28, 2008 by the Cuban government during the VI Central Committee of the Communist Party of Cuba.

Raul Castro, in the conclusion of the partisan event, assured that the agreement from the State Council did not represent the “suppression of the capital punishment” of the penal legislation.  He also acknowledged that it was one of the weapons he had stored for use against the “true mercenary terrorists who are at the service of the empire”.

The official media used “…in accordance with the goals of the socialist society” one of the recognized rights provided by the Cuban Constitution — freedom of press and speech.  However, their directors committed various penal infractions upon allowing dissidents to be considered mercenaries and sponsors of terrorism.  Something which is extremely far from the truth.

“…No one should be subjected to degrading treatment”, as declared by the Universal Declaration of Human Rights.  These, and other rights like honor and personal freedom and security were violated by the official media, in their desire to discredit all actors of Cuban civil society.  In fact, these rights are protected by Cuban penal laws.

According to the Penal Code, whoever acts with a dishonorable conduct can damage their reputation through public opinion.  It also classifies as coercion those who illegitimately impede others from doing what is not prohibited by the law, or from exercising their rights.

According to the Cuban Constitution, “All citizens enjoy the same rights and are subject to the same duties”, however Cubans who suffer such attacks within the island are unprotected.

They are exposed to slander, threats, and ignorance on behalf of the authorities which supposedly should defend the socialist institution and its legality.  In fact, it is them who turn to the media to carry out arbitrary actions in exchange for total impunity.