Last week, Cuban Cardinal Jaime Ortega secretly traveled to Brussels to pitch the European Union to unilaterally end its Common Position towards the Castro regime, which conditions the normalization of relations to democratic reforms.

According to witnesses, Ortega sought to (shamelessly and selfishly) downplay the role of dissidents during his meetings.

(Yet, for some reason, Ortega found it necessary to “intervene” last year when dissidents cornered the regime pursuant to the tragic death of hunger striker Orlando Zapata Tamayo).

Tragically, while Ortega was busy promoting himself in Brussels as the interlocutor of all things Cuba, the Castro regime was beating-to-death another dissident — Juan Wilfredo Soto.

We are still awaiting the Catholic Church’s reaction to Soto’s murder.

Yesterday, Ortega began the second leg of his latest self-promotion tour with a visit to Washington, D.C. — en route to Nebraska, where he will be speaking at Creighton University.

During his visit to Washington, Ortega met (yet again) with U.S. Assistant Secretary of State Arturo Valenzuela at the Vatican Embassy.

(Valenzuela announced that he would be stepping down this summer).

Guess what he pitched? 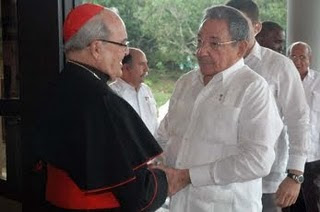