According to the Wall Street Journal:

Syria’s leading activists are going deep into hiding following a relentless and brutal crackdown by the regime, at a time when protest leaders were expected to be emerging into public view, as they did at this stage in Tunisia and Egypt.

But while security forces have curbed the organizational capabilities of protesters against the 11-year rule of president Bashar al-Assad, it hasn’t crushed dissent. Supported by Skype, the Internet and satellite phones smuggled into the country, many push forward, monitoring protests and sending out information.

Guess where most of the funding for these “smuggled” satellite phones comes from?

So where are the investigative reports on the efficacy of Syria democracy programs?

Where are the cries that these violate Syrian law?

Where’s the outrage that these programs are promoting “regime change”?

Where are the accusations that they are “covert”?

After all, advocates of normalizing relations with the Castro regime were incensed that American development worker Alan Gross — who has been unjustly imprisoned in Cuba since December 2009 — was distributing satellite phone equipment to Cuba’s Jewish community.

Are attacks on U.S. democracy programs discriminately focused on Cuba?

Or maybe, the Castro regime just has some really good lobbyists. 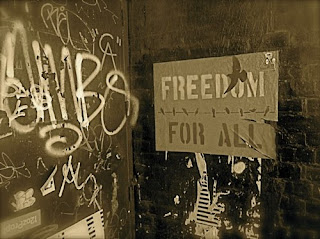 2 thoughts on “One monkey don’t stop no show — Libya Yes! Cuba No!”