The title of this post caught your attention because its staggering unlikeliness makes it spectacular.  No, Granma, the official organ of the Castro dictatorship, has not denounced the murder of Cuban dissident Juan Wilfredo Soto Garcia by Castro security agents. It has actually done the exact opposite. It has exonerated the Cuban regime of any wrongdoing by blatantly lying, as it has always done, which is really not all that spectacular.

A forensic doctor and relatives of a Cuban dissident who died were quoted in the official Granma newspaper Thursday as saying that he never complained of any police beating, showed no bruises and died of natural causes.

Granma also quoted a man who sells flowers in the park where the alleged beating took place as saying that he saw no violence when police arrested Juan Wilfredo Soto Garcia in the central city of Santa Clara.

The report underlined the Cuban government’s prompt and strong denials of the beating allegation, compared to the many days it took to publicly address the case of Orlando Zapata Tamayo. The political prisoner’s death after a hunger strike last year sparked widespread condemnations of the island’s human rights record.

International reactions to Soto’s death on Sunday appear more muted so far, apparently because of the conflicting versions of the beating, the ill health of the 46-year-old dissident and questions about the exact cause of his death.

Granma reported that Ricardo Rodríguez Jorge, the government forensic expert who performed the Soto autopsy, said he had found no internal or external evidence of violence and that the dissident died from acute pancreatitis.

It also quoted Soto’s niece, Madelín, as saying that she visited him in the hospital and saw “no sign of violence. Besides, if they had so much as scratched him, he would have told me because he trusted me totally.”

Her husband, Yasmil Pérez Rodríguez, was reported as saying that he spent several hours with Soto in the hospital Friday and Saturday and never saw any bruising on his body.

Soto’s relatives have refused to talk to the foreign press. Dissidents in Santa Clara said they were not active in the dissident movement and did not want to become involve in a politically sensitive case. 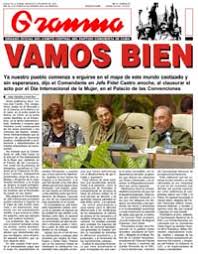