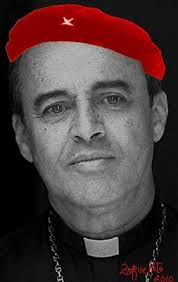 They said we were ungrateful jerks when we did not heap praise on Cardinal Jaime Ortega for negotiating the forced exile of Cuban prisoners of conscience. We were being irrational, they said, when we criticized the Cardinal for basically negotiating with the Castro dictatorship the banishment of these political prisoners. Cardinal Ortega countered that he received assurances from Raul Castro (no doubt during a whine and cheese party) and that these prisoners of conscience and their family members would be allowed to return to Cuba if they so desired.

Apparently, we were right, and Cardinal Ortega was wrong. Actually, I sincerely believe Ortega was lying.

Via El Nuevo Herald (my translation):

EFE: MADRID — Various family members of Cuban dissidents exiled to Spain denounce that the island’s government is stopping them from returning to the country, in spite of the promise that they could return to Cuba whenever they desired if they accepted forced exile.

That is how it was described by the spokesperson for the Cuban Observatory of Human Rights (OCDH), Alejandro Gonzalez Raga, who says he has informed the Spanish Foreign Ministry of the situation, who mediated along with the Cuban Church with the island’s government so the prisoners could be released.

During that process, initiated in July 2010, 115 members of the opposition were released by the Cuban government, of which 103 traveled to Spain with 647 family members, and only 12 of the “Group of 75” rejected forced exile and remained on the island after being released.

According to the denouncement, the Cuban embassy in Madrid has denied permission to return to Cuba to ten close family members of former political prisoners who have expressed a desire to return to the island either temporarily or permanently for personal reasons.