At the very bottom of the list is Cuban dictator Raul Castro (24.3).

And just barely beating Raul were his partners is crime, brother Fidel (26.9) and Venezuela’s Hugo Chavez (26.4).

The poll, conducted by Activa Research and the Ibero-American Consortium of Market Studies and Ivestigations (CIMA), interviewed 9,667 people in 20 countries throughout Latin America.

Raul’s popularity is also at a bare minimum (except with his brother) within Cuba, as an IRI poll found last month.

And that’s why the Castro’s selfishly and tragically rule by force — through the barrel of a gun. 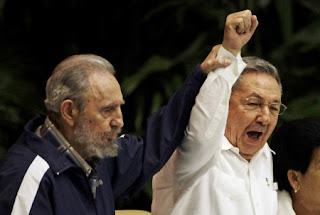 3 thoughts on “The very unpopular Raul”