It Will Not Be the Editorials

Despite how much the government may try to terrorize me with those outlandish editorials, I will continue to raise my voice for Juan Wilfredo. I will not be known as the pastor or the Levite who quietly walked by a man who was beaten and thrown on the floor. My goal is to be the Samaritan who took care of him. And although I can no longer heal his wounds, his words still resonate within me. On that morning of Thursday, May 5th God made it so that our paths cross in time and space for the last time so that, in the words of Soto himself, I would find out about the severe beating which they had carried out on him with their batons.

It is inadmissible that, in their attempt to dust off this death from their shoulders, the Cuban government has referenced the wars in Iraq and Afghanistan, the prisons of Abu Ghraib, and the Guantanamo Naval Base, in addition to thousands of other problems. The fact that crimes are being committed throughout the world does not mean that they are justified in Cuba. The difference is that the death which I came in close contact with was that of my friend Juan Wilfredo. He considered me to be his pastor and he had no reason why to lie to me. And, aside from that, more than his words, his expressions of pain were what really spoke to me, as they also did to thirty other referential witnesses who, just like me, are willing to give declarations, without mentioning those who are not willing to do so because they feel a fear which I will not judge them on. 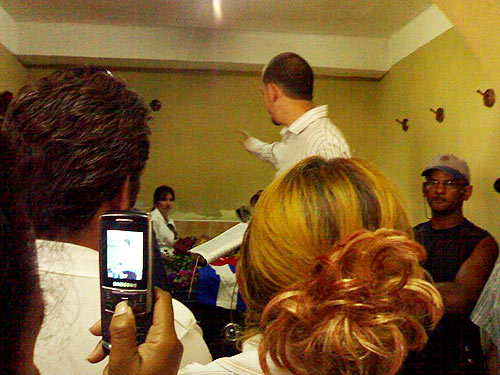 The pastor speaking his final words at the funeral.  The lady next to the coffin is Madelin, Wilfredo’s niece.

What is most alarming about the situation is that the case of THE STUDENT is not an isolated case. Every week their are reports about beatings and mob attacks. I recall one case in specific where I was denouncing the violent acts being carried out against Sara Martha Fonseca Quevedo in the Rio Verde neighborhood of Havana which were occurring at the same time that the 6th Communist Party Congress was taking place. In fact, the report established by the Congress even provides an initiative for carrying out such mob attacks in their second to last paragraph. The only difference in this situation is that Sara Martha did not die from the beatings, at least not from the instant wounds, but no one can tell what the other traumas they inflicted upon her will cause through slower repercussions. If she would have died, the government would have also tried to dust off their responsibility and would have evoked another death by natural causes. And, of course, this is because there is nothing more natural than to die after a beating.

I am not in favor of anyone coming an bombing Havana, but I am also not in favor of anyone beating a man with impunity, as occurred with Juan Wilfredo after they burst his pancreas. In respect to the dispute between Cuba and the United States, I have always been a believer that the problems we Cubans face must be solved by Cubans. And this is one of those problems where, by product of the work and grace of Providence, and not of an international campaign which seeks to fabricate some sort of excuse, I find myself involved. I would only like to point out that the words which I am saying were not spoken after the death of Juan Wilfredo, but instead on that very morning when the beating took place, as can be proven on the internet by anyone who wishes to check my Twitter account: @maritovoz.

I was not the only religious minister to have had a close relationship with Wilfredo. And I’m not talking only about Cuban pastors. THE STUDENT already made up a part of the normal urban landscape of the Vidal Park in Santa Clara. Various distinguished international evangelical ministers who had visited the city also met with him and established a cordial relationship with him. I will not mention their names, for I do not have the permission to do so, but from afar, I am well aware of their state of emotion towards the subject. From abroad, and also from very near, I am receiving various displays of worry and credibility because of my words. I do not feel like I am alone.

I feel that the Cuban government, which is always unwilling to to open its doors to international investigations, could turn to some sort of specialized and neutral commission which would corroborate in this very lamentable situation. But neither the threatening editorials or the condemnations of half the world will strike fear in me, and neither will their attempts to try and prove the innocence of a desperate government. As the popular saying goes, “Tell me what you brag about and I’ll show you what you lack”. With that said, this village priest will continue repeating with all the power vested on me by justice and truth, that the blood of Wilfredo, like that of any other person whose life was snatched from this world by force, cries out for God from down here in this land.