Capitol Hill Cubans slices and dices through the lies and falsehoods of Rep. Charlie Rangel’s call to appease and reward the brutal, murderous, and vile dictatorship of the Castro crime family.

Rangel’s Problem With the Truth

U.S. Congressman Charlie Rangel (D-NY) seems to have a problem with the truth.

Last week, Rangel sent out the following Congressional Dear Colleague — urging support for his legislation to lift sanctions towards the Castro regime — full of misleading statements (or blatant lies).

Thus, we’ve taken it upon ourselves to correct (CHC, in italics) each false assertion Rangel makes. A few observations are included also.

From: The Honorable Charles B. Rangel

Support H.R.1886 To allow Travel Between the United States and Cuba

With the recent announcement by Cuba of important economic reforms, the time has come for the United States to take positive reinforcing action.

CHC: Not exactly a moderate or reasonable group of co-sponsors.

I am soliciting your support to allow unrestricted travel between the United States and Cuba.

While President Obama’s announcement on April 13, 2009 relaxing travel rules between the United States and Cuba was welcome, I am re-introducing this resolution to take further action toward normalizing travel between the two countries.

In accordance with Article 13 of the Universal Declaration of Human Rights, the right to travel freely is a fundamental human right. For nearly half a century, our citizens have been denied this right when it involved travel to Cuba. While current policy allows family members of Cuban nationals to travel there, most Americans are outright banned from travelling to Cuba – not for study, not for tourism, not even for charity. Your support of this H.R. would undo these unsuccessful and unpopular restrictions on American citizens and legal residents.

CHC: Americans are allowed to travel to Cuba. What they’re not allowed to do is engage in financial transactions for certain types of travel, particularly those tourism-related. The reason for this prohibition is that Cuba’s tourism industry is a monopoly of the Castro dictatorship and one of its main sources of revenue. As for the assertion that Americans can’t travel to Cuba for study or charitable purposes, that’s just an outright lie.

In the 111th Session, the measure amassed bipartisan support, drawing 31 House cosponsors, from embargo supporters to proponents of normalization. That’s because the right of unfettered travel for our citizens has nothing to do with politics on the island. It has everything to do with basic freedoms, common sense, and ultimately, compassion. It is too much of a sacrifice to ask from our people, in particular our Cuban descendent brothers and sisters, to forego funerals, weddings, births, and death-bed invitations on an island just 90 miles away.

CHC: “Our Cuban descendent brothers and sisters” are not currently asked “to forego funerals, weddings, births, and death-bed invitations.” Rangel himself recognizes this in his opening paragraph. It’s another blatant attempt to mislead. Furthermore, where’s Rangel’s mention or consideration for the freedom and rights of the Cuban people, whose oppressors he’s all-too-willing to embrace and finance?

Not even for the longstanding communist governments of North Korea, Vietnam, and China do we impose similar travel restrictions on Americans. It’s counterintuitive to expect democracy to flourish and change to take root in Cuba without allowing the free flow of our people and our ideas. Cuban society needs more of our American essence – not less.

CHC: First of all, tourism travel is not a main revenue earner for the dictatorships in North Korea, Vietnam, and China. Moreover, how is it “counterintuitive” to expect democracy to flourish “without allowing the free flow of our people and our ideas,” when this approach has utterly failed in North Korea, Vietnam and China — regimes that are no less repressive today than when the U.S. chose to unconditionally engage them. Finally, you have to love how Rangel and his co-sponsors only believe in American exceptionalism when it benefits anti-American regimes.

Our religious missionaries and charities are hamstrung by a policy that labels their generous donations and messages of hope, love, and brotherhood as contraband. Our academic institutions, researchers, and bright minds struggle with restrictions that disallow them from gaining – and more importantly, sharing – knowledge.

CHC: Rangel needs to actually read the Treasury Department’s current travel regulations (instead of playing the violin), which provide general licenses for religious and academic travel.

Increasingly, Americans yearn for change, including a majority of Cuban Americans who favor unrestricted travel, not just for relatives, but for every American. Listen to the American people and restore their fundamental right to travel.

CHC: Rangel doesn’t represent any Cuban-Americans. How would he feel if the elected Members of the Cuban-American community — all of whom oppose unilaterally lifting sanctions — told him how African-Americans in his Harlem district “really feel”? 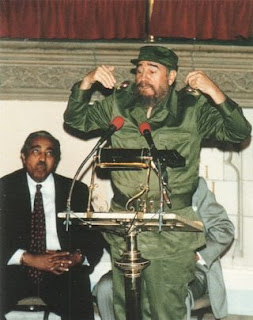 4 thoughts on “The lies and falsehoods of Charlie Rangel”