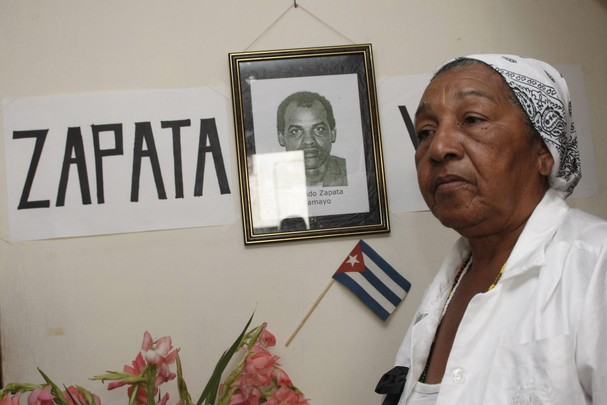 The mother of the martyred Cuban prisoner of conscience Orlando Zapata Tamayo will leave Cuba and arrive in the U.S. on June 9th. Reina Luisa Tamayo will be traveling along with 12 other family members. She stated that she has received the necessary documents from the Castro dictatorship and in an effort rid themselves of her and family, they have paid the costs for her and her family’s paperwork and flight expenses.

Havana (CNN) — The extended family of Orlando Zapata Tamayo, a Cuban political prisoner who died last year after a prolonged hunger strike, will fly into exile in the United States on June 9, according to his mother.

“We have all the papers. We’re traveling on the ninth,” Reina Luisa Tamayo told CNN on Friday in a telephone interview from her home in Banes in eastern Cuba.

She said the Cuban government had agreed to exhume her son’s body so that she could take his ashes with her, one of the impediments to her leaving sooner.

Zapata died in February 2010 after fasting for more than 80 days to demand better prison conditions. Fellow dissident Guillermo Farinas then launched his own hunger strike to demand the release of political prisoners.

In a deal brokered by the Catholic Church and Spain, the Cuban government eventually freed more than 100 prisoners, easing tensions with dissidents in Havana.

But Zapata’s family said they were still routinely harassed and bullied when they walked to the cemetery in Banes every weekend.

Tamayo told CNN she would travel with 12 other relatives to the United States as political refugees, but could not provide details about their final destination.

She said the Cuban government is footing the bill for their flight and the cost of all of the paperwork.

“But that’s because they are the ones who are most interested in getting rid of this mother whose son they assassinated,” she said.