According to the organization ASPAZCO in Spain, Reina Luisa Tamayo informed one of its administrators via telephone that she has been told that when she travels to the U.S., she will be sent to Arizona, not Miami.

Here is the report from the blog of Angelica Mora (my translation): 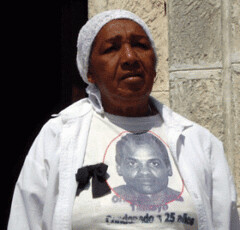 As if her current vicissitudes were not enough, Reina Luisa Tamayo, the mother of the martyred Orlando Zapata Tamayo, and her family will be sent to the state of Arizona.

On June 9th, her and 12 family members will arrive in this state and not Florida, as they had anticipated.

The news was given by Reina herself to Maripaz Martinez Nieto — an administrator of Aspazco in Spain — during a telephone call.

The trip from Havana to the U.S. will be “in transit,” and neither Reina Luisa nor her family members will be allowed to leave the airport in Miami.

Reina Luisa explained: “They tell me that I have to be in Miami on the 9th, and that there a person will come to get me to take me to Arizona, which I believe is close to Miami. And they tell me that they have sent many Cubans there.”

The deceit is easy to see. Arizona is not “near” — it is on the other side of the U.S., and sending her there is a way of minimizing the impact of the arrival of a prominent exile.

5 thoughts on “Reina Luisa Tamayo will be sent to Arizona?”