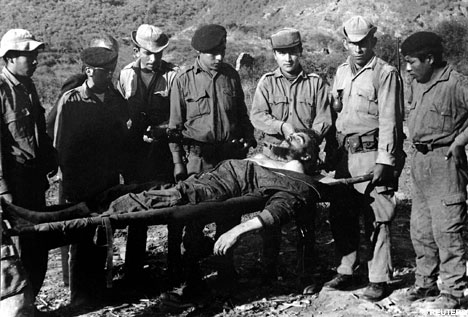 ‘Diary of a Combatant’ is the sequel to ‘The Motorcycle Diaries’.

(The Australian) – CUBA has published the diary that revolutionary icon Ernesto “Che” Guevara kept during the guerrilla campaign that brought Fidel Castro to power in 1959.

“Diary of a Combatant” recounts Che’s experience from the landing on December 2, 1956 of a band of revolutionaries aboard the yacht Granma, and their three-year armed struggle in Cuba’s Sierra Maestra.

Published by the Australian firm Ocean Press, the book was edited by the Che Guevara Studies Centre, which is directed by his widow Aleida March.

Ms March has painstakingly analysed his handwriting, to bring the most accurate version to light, the publisher said.

Che’s diary of his ill-fated guerrilla campaign in Bolivia, where he was captured by the Bolivian military and executed October 9, 1967, was a publishing sensation when it first appeared in 1968.

Born in Rosario, Argentina on June 14, 1928, Guevara met Castro in Mexico City in 1956 and joined the expedition of the Granma, which left Mexico with 82 men on board to overthrow the dictatorship of Fulgencio Batista.

Start of sidebar. Skip to end of sidebar.
End of sidebar. Return to start of sidebar.
During the campaign in the Sierra Maestra, Che was the first member of the band to be promoted to the top rank of “comandante” by Castro, and after their victory he held the positions of Minister of Industries and president of the central bank.

In 1960, he published a manual on guerrilla warfare and in 1963 an account of the Sierra Maestra campaign entitled “Episodes of the Cuban Revolutionary War.”

In 1965, he left Cuba with about 100 soldiers to foment a revolution in what was then the Belgian Congo, but it failed and he returned to Cuba to prepare for the campaign in Bolivia.

His remains were recovered in Bolivia by a Cuban-Argentina forensic team in 1997 and transferred to Cuba, where they are buried in a war memorial in Santa Clara, 280 kilometres east of Havana.

Let me know when “Hey, I’m Che! I’m Rotting in Hell Down Here!” gets published. I’ll order it in advance … hardcover.