Capitol Hill Cubans exposes how our Miami-Dade County commission is awarding billions of our tax dollars in construction project contracts to a business partner of the vile and murderous Castro dictatorship. Brazilian construction firm Odebrecht’s bloody hand prints are now all over Miami-Dade county, in our own backyard, thanks to the county commission.

The biggest gift of Lula’s presidency for the Castro brothers was an $800 million project to expand the Port of Mariel.

The company responsible for this project is Brazilian engineering and construction firm, Odebrecht.

Just another unscrupulous foreign company seeking to profit from the Cuban people’s suffering.

But to add insult to injury — Odebrecht is also one of Miami-Dade County’s biggest contractors.

The Miami-Dade County Commission, which awarded Odebrecht these lucrative contracts, has been under a great deal of scrutiny lately — and rightfully so.

We usually don’t comment on local and state politics — but how could Miami-Dade County continue to award contracts to Odebrecht (to this day) despite it’s partnership with the brutal Castro dictatorship (since at least 2009)?

Cuban-American (and Venezuelan-American) taxpayers in Miami-Dade County should demand accountability for this affront. 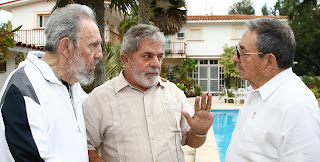