Capitol Hill Cubans exposes the hypocrisy and duplicity of one of the many organizations in the U.S. who claim to want freedom for everyone in the world except for Cubans. It appears that to these individuals, Cubans are the only ones in the world undeserving of freedom and not worthy of any help:

This week, the Director of the New America Foundation’s (NAF, D.C.-based think-tank) U.S.-Cuba Policy Initiative, Anya Landau French, posted another one of her compulsory critiques about USAID’s Cuba democracy programs.

As usual, Landau questions the mission of these programs, her distaste for “regime change” in Cuba (perhaps she prefers “regime preservation” — we prefer “regime choice” or how about just plain “freedom”) and even throws in this insulting observation:

“I’m not convinced USAID can find many Cuban youth interested enough in advocating political rights as per USAID’s revamped plans, when what the youth are really looking for is anything but political. (It’s the economy, stupid.)”

Sadly, this is the same observation that led Cuban dictator Raul Castro (80-years old) to select successors even older than him — for he doesn’t believe Cuba’s youth are “properly prepared” to assume positions of political power.

Moreover, Landau assails the Cuba programs for leading to the arrest of American development worker Alan Gross (who was helping Cuba’s Jewish community establish Internet networks) and for doing so without the “permission” of the Castro regime.

So imagine our surprise, when we read (in the very same week) the following excerpt in the New York Times about U.S. efforts to set up “shadow” Internet and mobile systems for dissidents in repressive regimes:

Developers caution that independent networks come with downsides: repressive governments could use surveillance to pinpoint and arrest activists who use the technology or simply catch them bringing hardware across the border. But others believe that the risks are outweighed by the potential impact. “We’re going to build a separate infrastructure where the technology is nearly impossible to shut down, to control, to surveil,” said Sascha Meinrath, who is leading the “Internet in a suitcase” project as director of the Open Technology Initiative at the New America Foundation, a nonpartisan research group.

“The implication is that this disempowers central authorities from infringing on people’s fundamental human right to communicate,” Mr. Meinrath added.

Isn’t this contrary to what NAF‘s U.S.-Cuba Policy Initiative advocates? 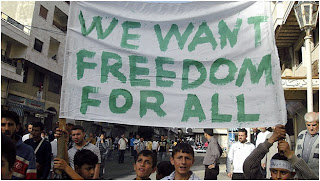 1 thought on “Cubans are not worthy of help or freedom”