The health of Jorge Cervantes Garcia, a Cuban prisoner of conscience on a hunger strike to demand his freedom, has worsened, and his family members believe he is close to death. 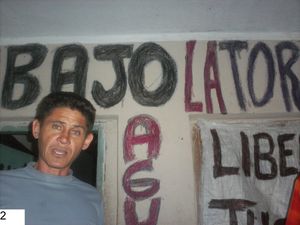 Political prisoner Jorge Cervantes Garcia’s family and fellow activists, in Cuba and in exile, are continuing their valiant efforts to save his life by informing the world of his struggle against the Castro dictatorship.

Cervantes has been on hunger strike for 17 days demanding his immediate release after he was arrested in March and ordered to serve 4 years remaining on an earlier sentence. This past weekend, the regime finally relented a bit and transferred from a punishment cell at the El Tipico prison to a hospital in Santiago de Cuba.

Cervantes remains on hunger strike, suffering the effects both his protest and of the tuberculosis he has suffered since his earlier stint in prison.

In a report posted earlier today on Facebook and on the MCL website, the Christian Liberation Movement (MCL) reported that his mother was able to visit him. She found in him in very poor condition, and even had to bathe him because he couldn’t do it himself.

Cervantes, however, remain committed to his protest.

“Jorge Cervantes proclaimed himself innocent of the vile charges that political police manufactured against him, and exercised his right to remain on hunger strike until there is justice and he is freed, or until he is martyred,” the MCL statement reads.

Protest by suicide is never an acceptable option, but it is important to remember that Cervantes is fighting back against his jailers by the only weapons at his disposal — his health and maybe his life. His is a desperate act, but it is the only thing he can do to achieve the freedom that is his right.

Fortunately, those of us advocating his cause have other options, which his family, his friends and this blogger will not stop using until there is justice and freedom for Jorge Cervantes Garcia.

Read the MCL statement, in Spanish, below the fold.