We are less than two weeks away from the June 28th runoff election for Miami Dade County mayor and the stink emanating from this race is getting worse. While mayoral candidate Julio Robaina’s shortcomings have been getting plenty of coverage, the questionable associations of his opponent Carlos Gimenez have not.

Last week I posted about a fundraiser for Carlos Gimenez sponsored in part by the infamous Carlos Saladrigas and Obama supporter Joe Arriola. Perhaps some of you are willing to overlook the connection to Obama, but I am certain most of you take issue with the Carlos Saladrigas association.

Unfortunately, the intrigue does not end there for this questionable fundraiser. Sources have informed me that Democrat party operative Joe Garcia was also in attendance at this fundraiser. Again, some may want to overlook this, but Joe Garcia’s nefarious connections should never be ignored.

Joe Garcia’s less than desirable connections apparently manifested themselves in Carlos Gimenez’ campaign when the same source also informed me that several local owners of Cuba travel agencies attended the Saladrigas/Arriola sponsored fundraiser. I have not been able to confirm without a doubt the veracity of this report. Nevertheless, the next Miami Dade campaign contributions report will provide us with the final word on whether the Gimenez campaign accepted contributions from individuals in Miami who are involved in a business partnership with the criminal and murderous Castro dictatorship.

In another story that broke early this week, we found out that the Brazilian contractor Odebrecht, who has an $800-million contract with the Castro regime to expand the Port of Mariel, has also been awarded billions in construction contracts by the Miami Dade commission. The same commission that Carlos Gimenez is a part of, and since the construction contracts had to do with transportation, they were under his supervision.

Did Carlos Gimenez know of Odebrecht’s deal with the Castro dictatorship? That is a question that he needs to answer, especially when a little research turned up some more interesting connections between Gimenez and Odebrecht.

It turns out that two of Odebrect’s lobbyists here in Miami have very strong connections to Gimenez. Sergio Pereira and Jorge Luis Lopez are part of Gimenez’ inner circle, and they also happen to be registered lobbyist for Odebrecht. In addition, Vicky Garcia-Toledo, the wife of another member of Gimenez’ inner circle Ralph Garcia-Toledo, is another member of Odebrecht’s lobbying crew.

By connecting the dots, it seems apparent that Gimenez has some very strong ties to Odebrecht. And this photo of him at the Odebrecht 20th anniversary shindig does not help: 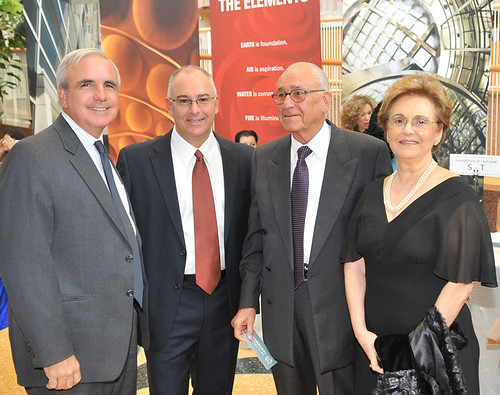 One of life’s truths is that when something stinks, you can be pretty sure there is something rotten giving off that smell. There is no short supply of rottenness in this race, and when June 28th rolls around, we will have to vote for the candidate that we believe stinks less.

In the end, it will all come down to what the voter believes is the most offensive odor: the smell of the allegations of maquinitas in Hialeah and questionable private loans, or the smell of associations with individuals and corporations that do business with the bloody and murderous Castro regime.

My nose knows, and has already made its decision.