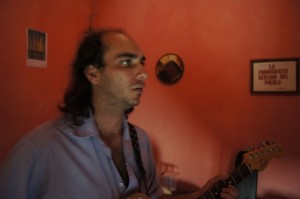 Diaz, a guy of a medium height, brown eyes and incipient baldness, studied at the elite Vladimir Ilyich Lenin High School, south of Havana, Cuba. One of those labs where the regime tried to mold the future “New Man.”

With Ciro the experiment didn’t work. Between rock music and political discrepancies, Diaz never fully understood the Prussian logic of the one and only commander. And he withheld the free applause for the father of the Cuban Revolution.

His idols were others. Nirvana, Metallica and Aerosmith. Since his first year of High School, he was the composer of songs that, later and without pretensions, he performed in the different bands at his school, which would form and disband in a period of a few months. In between octaves and complex theorems, Diaz graduated in mathematics on a sunny afternoon on July of 2004.

The rebel attitude of the rock band set off the red alarms of the island censors. The musicians in Cuba know very well what price they will have to pay for certain positions that break away from the guidelines dictated by the troop of bureaucrats who rule the national culture. “It’s simple. As if it was a part of a magic trick, you disappear from artistic life. They ban your concerts. And you can not record in the state’s recording studios,” Ciro explains.

Then, another life begins. In the underground world. Like an armadillo. Offering special concerts to your fans in a concrete factory backyard or in the park of your neighborhood.

In 2004, the band leader, Gorki Aguila, was sentenced to 4 years in jail. “They made up false charges of drug possession. That’s precisely when the band started to have a notorious anti-governmental stance. Thanks to international support, Gorki only served two years in jail.”

At a Pablo Milanes concert, on August 28 of 2009 in the Anti-imperialist Bandstand, known by everybody as the “protest-drome,” they tried to pull out a banner demanding the release of Aguila, who was detained at a local precinct.

“That became a battle ground. We were attacked physically and verbally by law enforcement agents,” remembers Ciro. Starting from this period, when the group couldn’t interact with its followers or record compact discs, the idea of having their own recording studio was born.

Such a crazy idea developed after the musician Gorki Aguila sold one thousand CDs during his trip to United States. “To that money, we added the help from friends in Europe and Central America. Building the recording studio was an odyssey indeed. We were under the microscope of the Cuban State Security forces, and for that reason we took the precaution of buying the materials and the equipment with their respective paper work. Everything by the book,” Ciro points out.

The dream came true a year and a half later. In June 2010, La Paja (“Jerk off”) Records was inaugurated. A studio built by the members of the band that allow them to make their own CDs.

“I got an audio operator’s license, and I pay taxes for it. The idea is not only to record our music . Also help to produce discs of marginalized groups regardless of genre, it can be rock, punk, salsa or hip hop. Any musicians whom the State closes their recording doors on can count on us,” said Diaz.

Although in reality he considers himself a composer. He has written hundreds of songs and composed themes for short films and documentaries. He spends half of the day between the console and the computer, producing music.

Right now, he is frantic. He had to repeat six times the recording of a string group, that didn’t come out the way he wanted. “Production steals a lot of time from my work as a composer. But it is something I enjoy. My dream is to give a mega-concert on the same square where one day we were repressed.”