Venezuela’s simian prince and second coming of the “Monkey of the Andes,” Hugo Chavez, has triumphantly returned to Venezuela to take his rightful place on the throne. After receiving medical treatment in Castro’s Cuba, the cancerous cancer of Latin America will return to the important work of destroying the economy and enslaving the Venezuelan people.

Any monkey that does less, would be less than a monkey.

Chávez returns to Venezuela after tumour removed in Cuba 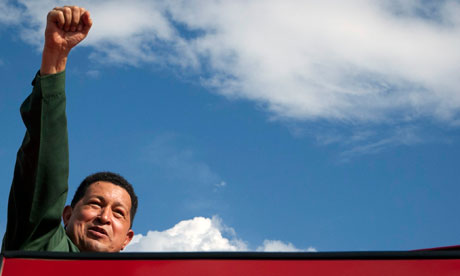 Venezuela’s showman president Hugo Chávez made a dramatic return home yesterday, addressing thousands of ecstatic supporters in Caracas with the battle-cry: “The return has begun”.

Hordes of Chávez supporters had flocked onto the streets outside the city’s Miraflores Palace to welcome back their leader, following his surprise return from Cuba in the early hours of Monday.

At just after 5.35pm local time a sea of red-clad supporters erupted in cheers and applause as Chávez stepped out onto the Palace’s “balcón del pueblo” or “people’s balcony” wearing a red beret and green army uniform.

“We will win this battle for life, for the fatherland and for the revolution,” Chávez told thousands of flag-waving supporters, speaking just days after admitting he was being treated for cancer in Cuba.

“We will overcome all of these difficulties,” he added from the iconic veranda, the setting for numerous key addresses since he came to power in 1999.

Chávez’s sudden return, nearly one month after he left the country, came on the eve of Venezuela’s independence celebrations that kick off on Tuesday.

1 thought on “Behold, the ‘Monkey of the Andes’: Chavez returns to Venezuela”